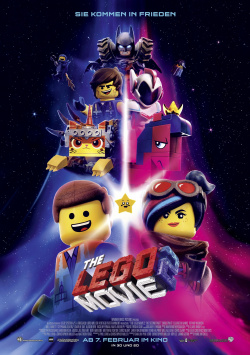 Five years ago, everything was great in Emmet and Lucy's world. But then the LEGO DUPLO invaders came from an alien world and destroyed the LEGO world. Each rebuild was followed by another destruction, until the once colorful stone town was turned into a post-apocalyptic no man's land. The only one who still believes in good here is Emmet. But when Lucy, Batman, and other of his friends are kidnapped, even bona fide Emmet must realize it's time to put the past behind him and fight for a new future. And so he sets off for an alien galaxy to rescue his friends - a new world where all manner of strange characters, merciless earwigs and plenty of glitter await.

The Lego Movie 2 takes on a heavy legacy. After revealing at the end of Part 1 that the entire world was created by a boy in his basement, a way now had to be found to be able to continue that story anyway. Phil Lord and Christopher Miller, who this time only worked on the film as writers and producers, certainly managed to do that. Still, that truly original spark of the first part is no longer present in the sequel. This may also be due to the fact that the then still surprising style is now a bit worn out by two more LEGO cinema films.

Sure, there are also in the second part some really good gags, wonderful guest appearances and successful plot twists. But it never reaches the class of its predecessor - even if some scenes come very close. With some aspects of the story, the creators around director Mike Mitchell obviously knew that the audience will catch on to them very quickly. This is especially true of the character of intrepid fighter Rex Dangervest, who teams up with Emmet to save his friends. Since it was clear that there was no real surprise to be had here, it's simply flirted with a bit. So Rex, who is voiced by Chris Pratt in the original as well as Emmet, gets to deliver a sort of best of the actor's movie career so far on the side, which makes for some really amusing gags.

When self-deprecation, subversive humor, and delightfully offbeat references to other movies are put to work, The Lego Movie 2 is almost as much fun as the first installment. When the whole thing focuses on the story, the weaknesses of this sequel become much more apparent. In the end, you leave the cinema well entertained. But the big enthusiasm still doesn't want to set in. So lower your expectations a little bit, then a clear: Worth seeing!