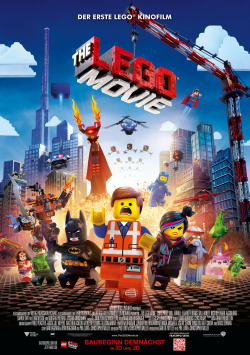 The times when playing with LEGO bricks was limited to the children's room at home are long gone. LEGO fans have long since given free rein to their creativity on the Internet, exchanging their ideas here, presenting their own creations or recreating film classics in small stop-motion animated films. These so-called brick films are so popular that there are now even festivals. And the major studios have also long since discovered LEGO for themselves. There are already various LEGO DVDs about the STAR WARS universe or popular comic superheroes. Now LEGO has also made it to the movies with a detail-oriented adventure that will have audiences literally marveling at building blocks.

The story of The Lego Movie centers on Emmet, an unassuming little LEGO character who strictly follows the instruction manual not only in his work on the construction site, but in all other aspects of everyday life. Emmet seems to be really happy with this, too. But then his life is turned completely upside down when he is mistaken for The Special One by Wyldstyle, the most beautiful woman he has ever seen. Legend has it that The Special One is a great hero who alone can save the various LEGO worlds from the evil Lord Business and his mysterious weapon. However, Wyldstyle doesn't realize that Emmet isn't really a hero at all until they're already in the middle of the turbulent adventure. The fate of the LEGO world seems to be sealed. But with the help of Wyldstyle's friend Batman, the wise Vitruvius, and other allies from the different worlds, Emmet might rise above after all, if only he could finally learn to break away from the instruction manual.

Whether it's explosions, smoke, waves, or rocks, everything seen in The Lego Movie is made of LEGO bricks. Out of about 15 million bricks, to be more precise. Admittedly, these are all virtual, i.e. computer-generated bricks. Nevertheless, the makers attached great importance to only show things that could theoretically be realized in reality. So they deliberately refrained from giving the figures greater mobility. With tremendous creativity, directors Phil Lord and Christopher Miller (Cloudy with a Chance of Meatballs, 21 Jump Street) and their team have staged the story of the inconspicuous nobody who becomes a great hero. The toy adventure is so peppered with allusions to movies and TV series and filled with countless little details that it's hard to grasp it all on first viewing.

It's almost too much of a good thing at times, what can be seen here in 100 fast-paced minutes. There's hardly a second where there isn't something to laugh at, marvel at, or nostalgically daydream about. While it's mostly charming and amusing, it's also a bit exhausting and even a little tiring towards the end. But even if The Lego Movie runs the risk of degenerating into visual overkill, there are enough moments for which one gladly accepts this shortcoming. A nice homage to Star Wars for example (for which commendably in the German version the original voice actors of Han Solo and Co. could be won), or a successful side blow to Starbucks ensure that just not only the eyes, but also the laugh muscles are challenged to the utmost.

That underneath the turbulent action there is also a declaration of love to playing with classic toys as well as to childlike creativity and imagination, also consoles over the somewhat overloaded production. The Lego Movie is not just a visual and technical tour de force. The film also has its heart in the right place and, in the best case scenario, could encourage children to get away from the television and computer and let their own imaginations run wild - if the makers have their way, of course, ideally with LEGO! Although released for ages 0 and up, the film's pacing and 3D visuals really only appeal to children ages 6 and up. But from this age, the animated adventure can be warmly recommended to all little ones and young-at-heart Lego fans. Or to say it with the song from the film, which Emmet would like to sing the whole day: Here everything is super!