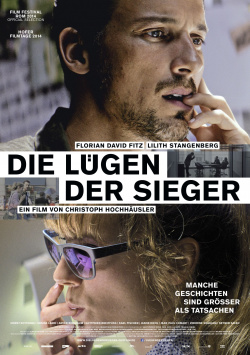 The Lies of the Victors

For a long time Fabian Groys (Florian David Fitz), a journalist for a political news service, has been working on a story about the dubious invalidity policy of the Bundeswehr. But now, shortly before he has gathered all the facts, his most important informant jumps off. The story seems to be dead. The fact that the notorious loner is now assigned an intern, Nadja (Lilith Stangenberg), of all people, increases his frustration even more. So he unceremoniously sets the young colleague on the lurid story of a man who threw himself into a lion enclosure. But to his surprise, the story, which sounds more like tabloid journalism, seems to hide an extremely explosive toxic waste scandal. Together Fabian and Nadja take up the research and come up against a wall of silence again and again. But the more they break through the web of lies and corruption, the clearer it becomes that the story seems to be connected to Fabian's research within the Bundeswehr...

Die Lügen der Sieger by Christoph Hochhäusler leaves a somewhat ambivalent impression. On the one hand, in its best moments the film is reminiscent of classic conspiracy thrillers like Die Unbestechlichen, spiced with a fair amount of satirical bite. The film is delightfully nasty and surprisingly funny in some scenes, with a very tense underlying atmosphere hovering over everything. Although Fabian Groys is a very clichéd character with his arrogant manner and his self-destructive gambling addiction, it is Florian David Fitz's engaging portrayal that makes him a very interesting character whom one enjoys following in her investigations.

It is all the more disappointing that he has been partnered with Lilith Stangenberg, whose manner of playing does not want to fit Florian David Fitz's at all. Stangenberg played at the Schauspielhaus Zurich for several years and has been part of the permanent ensemble of the Berlin Volksbühne since 2012. That she has talent cannot be denied for that reason alone. But what works powerfully and impressively on the theater stage doesn't necessarily work on the big screen. With a frozen facial expression that successfully fights against any display of emotion, Stangenberg's performance comes across as extremely undercooled and almost bored. That there is no chemistry between her and the much more dynamic Florian David Fitz is not really surprising, but extremely unfortunate.

Another problem is the ending. Here Hochhäusler fails to leave a lasting impression. True, on reflection it becomes clear what the intention behind the final minutes is. But the first impression radiates a disappointing triviality, which also has a lasting effect on the overall impression. No question: The Lies of Victors is at its core a very good, cleverly constructed film that tells an exciting story. But the implementation has to fight with too many unwieldy aspects, some lengths and a not always satisfactory build-up of the dramaturgy, so that there is the well-deserved worth seeing in the end only with a few small restrictions.

Cinema trailer for the movie "The Lies of the Victors (Deutschland/Frankreich 2014)"
Loading the player ...