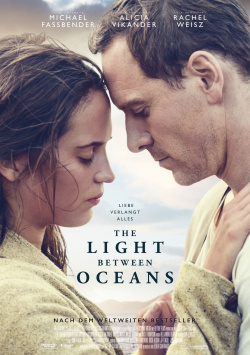 The Light Between Oceans

Western Australia in the early 1920s: To escape the traumatic experiences of World War I, Tom Sherbourne (Michael Fassbender) accepts a job as a lighthouse keeper on a remote island. Actually, the employment on the deserted island is supposed to last only three months. But when he is offered a permanent position and finds the love of his life in the young, fun-loving Isabel (Alicia Vikander), Tom decides to accept the offer and take Isabel with him to the island as his wife. Together they seem to have found true happiness, until Isabel suffers two miscarriages. Their grief threatens to break their love. But then everything changes when one day a boat washes up on the island. Inside lie the body of a young man and a baby that has miraculously survived. Despite Tom's doubts, the couple decides to keep the child and pass it off as their own - unaware of the terrible consequences that decision will have.

Director Derek Cianfrance isn't necessarily known for easy feel-good cinema. Blue Valentine or The Place Beyond The Pines were anything but light fare. And so The Light Between Oceans, the film adaptation of M.L. Stedman's bestselling novel The Light Between the Oceans, shouldn't be expected to be a shallow heartbreak romance either. Rather, Cianfrance has directed a drama bathed in hypnotically beautiful imagery that takes its audience on an emotional roller coaster. At the same time, his usual slow, unagitated narrative style definitely poses a challenge. If you can't get into it, you'll have to endure 130 very long minutes here. However, those who manage to let themselves be carried along by the quiet narrative flow will be offered a very moving story, which not only catapults its protagonists into many a moral dilemma.

Because even as a viewer you feel torn. You wish so much for Tom and Isabel to be allowed to be happy. You feel the love they have for the little girl, raising her as if she really is their daughter. And you're actually convinced that everything is exactly as it should be - until you're confronted with the fact that there's still the real mother, who is downright consumed by grief. Of course, now you wish for mother and daughter to be reunited, only to wonder if that's really what's best for the girl. It's a situation where there can really only be losers, whether or not Tom and Isabel's secret is kept. And it is from this dilemma that the film draws its enormous emotional power.

This is intensified by the very good acting of the three leads. Oscar winner Alicia Vikander in particular stands out. The transformation from a fun-loving girl, who with sparkling eyes and a disarming smile brings a withdrawn person like Tom back to life, to a woman broken by shame, fear and grief, who then finds new courage to live through a child, for whom she would do anything, is simply great. But Michael Fassbender and Rachel Weisz also manage to bring very human characters to the screen, with whom you as an audience feel for every second.

The Light Between Oceans is not an easy film. For long stretches, the story is very sad, and even the beautiful images only help marginally. But at least there is a small, conciliatory glimmer of hope at the end, which doesn't leave the audience completely depressed and ready to go back to normal everyday life. But you have to be aware of the fact that you get to see a somewhat toughly told movie that isn't exactly stingy with big emotions. And if you have a problem with that in general, you probably won't be able to make friends with this drama. But if you love elegantly told emotional cinema and want to see great actors in front of picturesque scenery, you should not miss this successful bestseller adaptation. Absolutely worth seeing

Cinema trailer for the movie "The Light Between Oceans (USA 2016)"
Loading the player ...