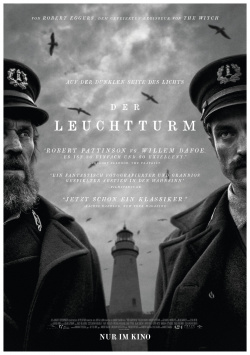 Maine, late 19th century. Century: veteran lighthouse keeper Thomas Wake (Willem Dafoe) joins his new assistant Efraim Winslow (Robert Pattinson) for a multi-week shift on a remote island on the New England coast. Cut off from the outside world, the two men are to maintain the dilapidated lighthouse facility and keep it in working order. Efraim would like to take care of the beacon, but Thomas won't let him. For the young man, he says, the lamp is off-limits. Instead, Efraim must tend to menial tasks, leading to ever-increasing tensions between the mismatched men. When a never-ending storm traps the men on the island, madness seems to overtake them and the situation threatens to escalate.

The Lighthouse is the second directorial effort from writer-director Robert Eggers, following his highly acclaimed debut The Witch. In order to transport viewers as authentically as possible to the period around 1890, he shot the film in 35mm black and white and used lenses from the early 20th century. He also had his two main actors speak in authentic dialects of the time. Such artistic choices naturally make the hearts of cineastes rejoice, and so the film is sure to win praise in the feature pages and awards at various awards ceremonies.

There's something about this film, no question about it. It is thoroughly fascinating, disturbing and special in its extremely unwieldy way. If you can get into it, you will definitely celebrate this film. However, I did not succeed in doing so. For me, not only the visuals, but also the language and acting of the cast just seemed too artificial, too theatrical. What makes the film for some so special, so great, has led with me rather to the fact that the journey to the abyss of madness has left me relatively cold and has gone to me in places even quite on the nerves.

Even if some images really have an enormous impact and especially Robert Pattinson plays really strong, I have the question Is this art, or can this go away for me quite clearly answered with that can go away. But in this case I emphasize that for me, because with a film like The Lighthouse it is clear that it polarizes. I personally couldn't recommend it, but I also understand if you can see it as a very special piece of art and celebrate it accordingly. And so there is a hesitant worth seeing from me for all those who liked The Witch and like to engage in unwieldy, but definitely artfully staged psycho-trips!

Cinema trailer for the movie "The Lighthouse (USA 2019)"
Loading the player ...