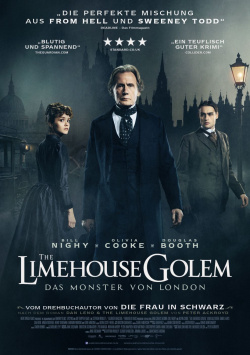 London in 1880: Inspector John Kildare (Bill Nighy) is assigned a particularly difficult case. In the borough of Limehouse, a serial killer is on the loose, acting so cruelly that many citizens believe the culprit must be the Golem, a mystical being. After all, a human being cannot be capable of such acts. Kildare, on the other hand, must assume that he is dealing with a flesh-and-blood perpetrator. His investigation leads him into the surroundings of the popular music hall and its star Dan Leno (Douglas Booth). When Elizabeth Cree (Olivia Cooke), one of the Music Hall actresses, is accused of murdering her husband, the case takes its first turn. But the further Kildare follows the various leads, the deeper he is drawn into a web of lies, conspiracy and murder that threatens to derail even an experienced investigator like him.

In adapting Peter Ackroyd's novel The Limehouse Golem, director Juan Carlos Medina takes his audience into the narrow, grimy alleys of Victorian London. Here, he builds a dark atmosphere in which a classic thriller scenario is embedded. A few false leads are laid until the finale, though the actual solution is actually very obvious. But the staging is clever enough to present it as a real surprise at the end after all. And that is enormously important, so that the film can keep its tension level, which is already built up at the beginning.

With Bill Nighy a very charismatic investigator was found, who can convince not only with a sharp mind, but also with rough edges. Kildare is a great cop, but he is also a human being with many a weakness. And that doesn't necessarily make the work in this particular case easier - but all the more exciting for the audience. However, this can't prevent that there are some rather tough moments in the course of the story where you run the risk to lose interest in the sometimes quite bloody events.

In its weakest moments The Limehouse Golem is nothing more than conventional TV fare in the style of series like Ripper Street. But fortunately there are enough scenes in which cinema level is reached again and in which the rising boredom is replaced by gripping tension. If you like classic mystery-thrillers with a light gothic flair and if you can stand a few little lengths, this very well cast bestseller adaptation can be warmly recommended to you. Worth seeing

Cinema trailer for the movie "The Limehouse Golem (Großbritannien 2016)"
Loading the player ...