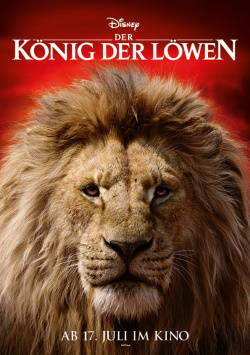 Who doesn't know it, the story of the little lion Simba, who is supposed to become the King of the Lions one day - if it weren't for his evil uncle Scar, who lures Simba's father Mufasa into a deadly trap and convinces the little lion that it's his fault, whereupon Simba leaves the kingdom he would later rule. More than 25 years ago, the success story of The Lion King began, going far beyond the box office success of the animated film.

In addition to several home movie sequels and millions of soundtrack CDs sold, the story of Simba the little lion has also been a smash hit as a musical. The songs Elton John wrote and sang for the film have long been classics of modern pop music, and the popular supporting characters Timon and Pumbaa are now among the most beloved Disney characters of all. And so it was really no big surprise that The Lion King will also get a facelift in the wake of the successful new or live-action adaptations of the Disney catalog.

Responsible for this is Jon Favreau, who was already able to visually wring new, impressive pages from the Jungle Book. With him Simba, Timon, Pumbaa and Co. now come out of the computer. The film was shot in a complex virtual reality process. The result: breathtaking, photo-realistic images. No question, Favreau's The Lion King is visually a masterpiece. But that strength is also a weakness of the film.

For one, there's the fact that some scenes, by seeming so extremely real, can be even more frightening to young viewers than they already were in the animated film. The release from 6 years is really borderline there. On the other hand, the drawn animals had much stronger facial expressions precisely because they were so different from reality, which ironically made them seem more alive than the now very real-looking CGI animals. However, the animations are so terrific and the characters so endearing - especially Timon and Pumbaa - that this is hardly a negative.

Also, the story works very well in this partly supplemented, partly absolutely identical version. What really disappoints, though, surprisingly, are the new songs. Elton John's new end credits song sounds like an inconsequential track that didn't make it onto his last album, and Beyonce's Spirit seems like a bland Circle of Life rip-off on Valium. And since there's always a direct comparison to the wonderful music of the original, the comparison that the new tracks just can't stand up to is almost imposing.

There are some quite wonderful moments - like when Timon briefly quotes another Disney classic. And you don't really notice the major criticisms until you think about it more carefully, which most moviegoers probably won't. Because they are so intoxicated by the images and absolutely captivated by the story - especially if they don't know the animated film - that everything else fades into the background. All in all, it's technically perfect and impressive, but just because of that, it's also a little less charming than the animated film. Perhaps Disney should use the great opportunities afforded them by modern filmmaking techniques to develop new material, rather than frantically trying to perfect something that is inherently timelessly beautiful. But that's bound to remain wishful thinking for many years to come, given the millions of dollars these remakes are raking in. And so it goes: absolutely worth seeing for kids 8 and up, and for adults who want to lose themselves in the images more than anything else!