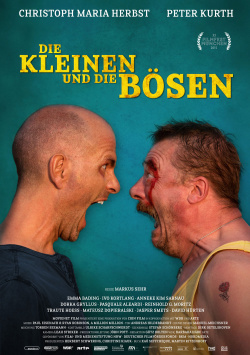 The Little Ones and the Bad Ones

Probation officer Benno (Christoph Maria Herbst) is fed up with his job: he is constantly lied to, stolen from and used. He hasn't had the feeling of making a difference or helping for a long time. And then his problem child Hotte (Peter Kurth) is also awarded custody of their children Dennis (Jasper Smets) and Jenny (Emma Bading). An absolute catastrophe, since Hotte is only interested in child support and not in raising his offspring. But then the crook actually begins to develop a little taste for family life. But a tragic accident, a lucrative lure and the dedicated Benno make it impossible for Hotte to actually become a better man...

The Little Ones and the Bad Ones is the new film from director Markus Sehr, who has already shown a good knack for unusual material with the Kurt Krömer comedy Eine Insel namens Udo. And so it's not really surprising that his new film is difficult to pigeonhole. It's funny, but not a pure comedy. It has quiet, almost socially critical dark moments, but is anything but a drama. And there are even slight thriller elements, but in the end they are again too overdrawn to offer any real suspense. Instead, the movie is a colorful mix of different stylistic elements, which gives it a character all of its own. This is its great strength, but at the same time also its outstanding weakness.

Because it is not exactly made easy for the viewer to get used to the very special atmosphere of the production. Is one supposed to laugh here now or be shocked after all? And can a really dark dramaturgical turn follow a wonderfully grotesque humour? The mixture of humor, social drama and romance could then also seem a bit indecisive for some viewers. But those who can get involved in the unadjusted staging will realize that Markus knows very very well what he is doing and that it is precisely the non-conformity to the expectations of the audience that makes the special charm of Die Kleinen und die Bösen.

This begins with the role of Christoph Maria Herbst, who for once is not just another Stromberg variant. No question, as a cynical creep, Herbst is great as no other in Germany. But it's just unexpectedly refreshing to see a slightly different side of him for once, one that is extremely likeable and yet also amusing. Peter Kurth as Hotte is the perfect counterpart: he is loud, a redneck by any standards and not exactly a pleasant contemporary. And yet one can laugh heartily at his brazen capers from time to time. This character then seems to undergo a significant transformation - but even here Sehr still has some surprises in store for his audience, until it comes to the turbulent finale.

This, however, is not quite as biting and consistent as the rest of the film turned out. But even if especially the last minutes drop to conventional TV-movie level, the rest of The Little Ones and the Bad Ones is a really entertaining and surprising dramedy, which even has real cult character in its best moments. If you like things a little quirky and unusual, this is the movie for you. Worth seeing

Cinema trailer for the movie "The Little Ones and the Bad Ones (Deutschland 2015)"
Loading the player ...