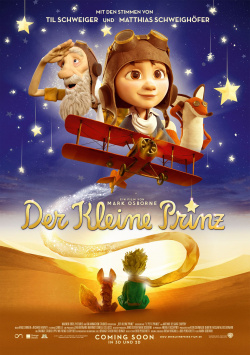 In order to be admitted to an elite school, a little girl moves with her mother to a posh new housing estate. The fact that they can afford a house here at all is due to their new neighbor. He's a weird old codger that no one else wants to live next to. The little girl doesn't quite like the old flyer either, who keeps trying to start his run-down plane in the garden. But then one day she gets to know him better and learns through his stories and notes about a very special adventure that he experienced as a young man. At that time he had to make an emergency landing in the desert and there he met the little prince, a strange boy from a distant planet. This meeting has never let go of the aviator. He desperately wants to return to find the little prince again. And the little girl wants to help him - not suspecting what adventure this will start for her.

The Little Prince is one of those animated films that run the risk of being completely lost in the mass of other animated films for a young target audience. The marketing, which is already very scaled back, seems to focus primarily on the fact that two of the characters in the German version are voiced by Til Schweiger and Matthias Schweighöfer. That may be reason enough for a few viewers to buy a movie ticket to see the film. But it is - without wanting to offend the two actors - the least attractive argument in favour of the film. For it is entirely other aspects that make this enchanting and absolutely worth seeing for the whole family.

The makers of this interpretation of the enchanting story of Antoine de Saint-Exup&eacute;ry have found a very nice way to tell the well-known story in a completely new way. All that is familiar from the book is indeed included here. But it is supplemented by a new frame story, which is itself incredibly imaginative and lovingly crafted, taking some aspects of the story and interpreting them in a very unique way. It's a story that encourages every viewer to live their dreams, never forget their inner child, and break free from any form of oppression.

The new frame story alone would make the film worth watching, yes. Worth seeing, but not necessarily special. This is achieved by the fact that two completely different animation techniques were also used for the two different storylines. The story about the little girl and the old aviator shines in a contemporary 3D computer animation look. The story of the little prince himself, on the other hand, was created using the classic stop-motion process, with most things - apart from the characters' faces - being made out of paper. This is to pay tribute to the book's illustrations. It's quite fascinating that a material like paper can end up creating something much more charming, imaginative and fairytale-like than state-of-the-art computer technology.

Which is not to say that the 3D animations are cold and soulless. Again, the creators have shown a good flair for endearing characters (the stuffed fox is cute to the bone) and imaginative imagery. Still, it's the stop-motion sequences that leave a lasting impression.

The Little Prince, even in this new interpretation, is an enchanting fairy tale for children in which you can completely lose yourself, even as an adult. A touching, but also exciting and amusing film that all lovers of enchanting animated films should definitely not miss. Definitely worth seeing!!

Cinema trailer for the movie "The Little Prince (Frankreich/USA 2015)"
Loading the player ...