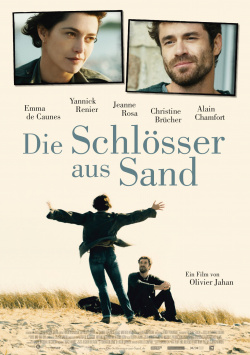 The Castles of Sand

After the death of her father, photographer &Eacute;l&eacute;onore (Emma de Caunes) inherits his house in Brittany. She has spent many happy moments in the house by the sea and associates with it precious memories of her father, but also of her ex Samuel (Yannick Renier). As business is not too good anymore, she is forced to sell the house. A difficult process in which Samuel, of all people, is supposed to assist her. As new prospective buyers are repeatedly shown through the house, &Eacute;l&eacute;onore and Samuel are confronted with their past and their failed love, which doesn't necessarily make letting go any easier.

The Castles of Sand is a very quiet drama about parting and grief. The sale of their late father's house and what will likely be the last reunion of a former couple who obviously still feel a lot for each other all evoke a lot of memories that are difficult, but necessary, to let go of. It took Olivier Jahan fifteen years to direct a second film after his debut, partly because his first work was not a financial success. With a small budget, he has now set out to make a small but substantial film. He was inspired by his own experiences selling his family's house.

The drama is full of numerous small moments of great truths about life, directed with a great deal of feeling, a little quiet humour and a very pleasant restraint. The two main actors play authentically and you can really feel the intense past that connects them. Even though their looks and gestures reveal a lot, the audience learns even more about their emotional world and also about their past through an off-screen narrative voice. Only at the end it is revealed who this voice is coming from, which gives the whole thing an additional charm. For on the one hand, the narrative perspective is shifted here and kept at a distance not unlike that of the audience. But unlike the audience, the narrative voice is omniscient and can reveal the emotions of the protagonists very honestly.

The Castles of Sand is a beautiful film for all arthouse lovers who have a soft spot for very quietly told, almost poetic life and love stories. A drama that shows how hard it can be to overcome the fear of a new beginning and how painful it often is to finally let go of what you love or have loved. For this there is clearly a deserved: Worth seeing!

Cinema trailer for the movie "The Castles of Sand (Frankreich 2015)"
Loading the player ...