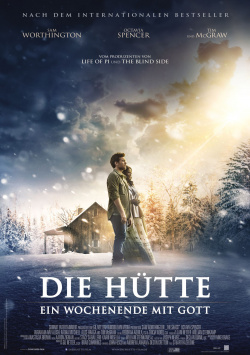 The Cabin - A Weekend with God

For Mackenzie Phillips (Sam Worthington), his hitherto ideal world comes crashing down when his youngest daughter disappears during a family outing and it is soon certain that she has become the victim of a serial killer. Her trail is lost in an abandoned cabin where a bloody piece of the girl's clothing is found. In his unending grief, Mack completely isolates himself from those around him. Neither his family nor his friends can get close to him. When one day he receives a mysterious letter inviting him to the abandoned cabin from God, he initially believes it is a sick joke. Still, he wants to know what awaits him in this place of his most painful memories. And so he sets off on a weekend that will change him forever.

The success story of the novel The Cabin - A Weekend with God is truly amazing: after no publisher wanted to publish William Paul Young's work, he simply took matters into his own hands. Just one year later, the book landed at the top of the New York Times bestseller list, sold 10 million copies in the USA alone and became an absolute bestseller in Germany as well, with over one million books sold. A film adaptation was only a matter of time, especially since Christian films can earn a lot of money in America. As a rule, these works cost comparatively little to produce, which is why the profit margin is all the greater. Quality is usually secondary.

And so it was to be feared that The Shack - A Weekend with God would be flat propaganda for Christian hardliners, which is hardly bearable for all other viewers. Fortunately, this is not the case. Admittedly, some scenes are laid on too thick and definitely hard to swallow for viewers who don't now deal with religion or their own faith on a regular basis. Also, at some points it is hard to accept the reasoning that is supposed to lead Mack on the right path back to life, as things are compared here that are not actually comparable (what they are shall not be revealed at this point for all those who have not read the book).

Despite this, on balance the film can be described as very successful. For the question here is not so much whether God, or the Trinity of Father (or Mother), Son and Holy Spirit really exists. Of course, an answer to this is strongly suggested here, but in the end this remains an individual decision for each viewer. No, rather, the issue is whether such indescribable pain as the loss of a child can be dealt with through forgiveness. Is the renunciation of hate and the desire for revenge the right way to heal one's own wounds and to be able to see the beautiful sides of life again? It is this question that the film explores in a pleasingly complex and sensitive way.

The whole thing is carried by good actors and a coherent staging, which despite a running time of more than two hours hardly lets any lengths arise. Sure, especially towards the end the story gets too cheesy and it would have been nice if director Stuart Hazeldine had worked a little more subtly here. But all in all he succeeded in making a moving adaptation of the bestseller, which will make you think even if you don't have much to do with religion otherwise. And for that, despite the mentioned weak points, there is a clear: Worth seeing!