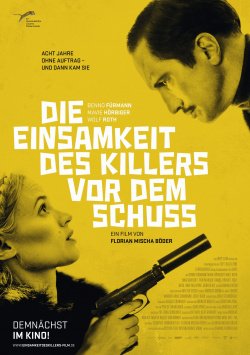 The loneliness of the killer before the shot

Koralnik (Benno Fürmann) is mighty proud. HE has passed the difficult training to become a professional killer for a top secret EU program with flying colors. Now he can hardly wait to be assigned his first job. But the eagerly awaited call just won't come. Koralnik waits a whole eight years, completely isolated from any social contacts and frustrated by doing nothing. One day, attractive Rosa (Mavie Hörbiger) crashes into his boredom-ridden life when she hits Koralnik's car. And before he knows it, he has a lady visitor in his apartment for the first time in years. It's a delightful but dangerous change of pace. But the fact that for once Koralnik doesn't stick to the rules he's lived by since his training soon takes its revenge. For Rosa has her own plans for Koralnik, and when he receives his first assignment now, of all times, he and his shady companion must embark on a turbulent odyssey that will not only decide his future as a professional killer.

In German cinema in particular, experimentation is not exactly the rule. Far too often, both dramas and comedies follow too worn-out formulas. Admittedly, very good and entertaining films are made time and again. But the big surprises are missing. But in the recent past some filmmakers and producers have shown the courage to realize material that is off the beaten track. And when such a work makes its way into cinemas, it is generally a pleasing thing, even if the end result is not perfect.

The Loneliness of the Killer Before the Shot is the perfect example of non-conformist, refreshing cinema from Germany. With a very quirky sense of humour, a delightfully absurd story and a superb Benno Fürmann, director Florian Mischa Böder's new film continually defies conventional narrative patterns. The interplay between Fürmann and the wonderfully manipulative Mavie Hörbiger provides plenty of amusing moments, which are intensified by the almost Nordic laconic staging. At the same time, Böder manages the feat of not degrading the character of Koralnik to a mere joke figure, despite certain exaggerations, but rather making him a very interesting anti-hero.

The fact that the professional killer is portrayed here as a very human figure with quite normal weaknesses, longings and fears, and not as a soulless fighting machine, naturally makes Koralnik much more accessible to the audience and one is genuinely interested in his story. Of course, the fact that it is then told in such an amusing manner makes it all the more enjoyable. Certainly, the film is not without its weaknesses. Some moments seem a bit forced and also the one or other length can't be avoided completely. But since Florian Mischa Böder serves his audience just not something too familiar, the whole thing tastes despite minor point deductions in the overall score but still really good.

Who wants to see once how a professional killer has to suffer from a lull in orders and who wants to go on probably the most unusual road trip of the year, should give this surprising cinema comedy in any case a chance. Worth seeing

Cinema trailer for the movie "The loneliness of the killer before the shot (Deutschland 2014)"
Loading the player ...