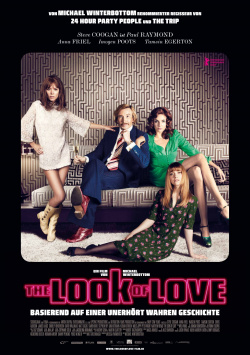 The Look of Love

Michael Winterbottom is known for taking on provocative or difficult material in his films. Thus, as a director, he seems almost predestined to film the life of a man who owes his success to quite a few social taboo-breaks. In The Look of Love, Winterbottom tells the true story of Paul Raymond, who made British social and scandalous history as the King of Soho. Raymond, played magnificently in the film by comedian Steve Coogan, started out in London with a show as a mind reader. He quickly realized that the audience's attention was less on him and more on his scantily clad assistants. This gave him the idea to make money with naked facts. Since women in Britain were allowed to show themselves naked on stage but were not allowed to move while doing so, Raymond resorted to a clever ruse: he simply declared his revue bar in Soho in London's West End a private club, thus creating the country's first strip club in 1958, which soon welcomed very prominent guests as members.

His marriage to former dancer Jean (Anna Friel) initially endures Raymond repeatedly indulging himself sexually with some of his revue girls. But when he falls in love with young dancer Amber (Tamsin Egerton), the marriage is over for him. He leaves Jean and begins a new life alongside the woman 20 years his junior. As an editor of men's magazines, he is also able to expand his success, but this does not protect him from some private setbacks. For Paul Raymond has to learn one lesson in a particularly painful way despite all his professional success: happiness cannot simply be bought, even with millions.

In The Look of Love, Michael Winterbottom mixes humor and drama into a fascinating and stirring film biography, which at the same time has also become a very coherent moral portrait of England in the 60s and 70s. With an excellent set, a coherent soundtrack and especially with his first-class ensemble of actors Winterbottom takes his audience on a journey through time, which is also extremely gripping for German viewers, even if the fewest in this country Paul Raymond may be a term.

As interesting as the biography of this really clever businessman may be, the film only works so well because the themes it is based on are quite universal, timeless things from which really good stories can be built - no matter whether they are fictional or real. The discussion of morality and responsibility, the question of what makes a good father, and what price one is willing to pay for wealth and success, all make The Look of Love so compelling, even without the proper foreknowledge of the true backstory.

Due to the ever-so-slightly lightening humor, Winterbottom skillfully prevents the film from seeming too melancholy, despite some very dark and even dreary moments, and at the same time manages to keep the entertainment value at a pleasantly high level at all times. However, its sometimes somewhat artificial storytelling also ensures that the film might come across as a bit unwieldy to some viewers. Friends of sophisticated film biographies and British arthouse tragicomedies, on the other hand, will be more than well served here. Therefore - alone because of the great performance of Steve Coogan, who is unfortunately far too unknown in this country: Absolutely worth seeing!

Cinema trailer for the movie "The Look of Love (Großbritannien/USA 2013)"
Loading the player ...