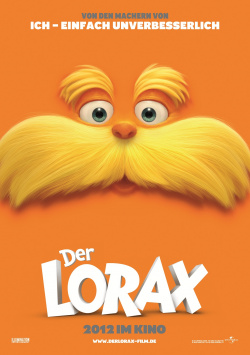 The books of Theodor Geisel, better known under the pseudonym Dr. Seuss, have been part of the standard repertoire of children's rooms for decades, not only in the USA. Whether The Grinch, Horton Hears a Hoot or The Cat in the Hat, with their very special rhymes and imaginative illustrations, the stories from the pen of Dr. Seuss have conquered the hearts of millions of readers, both young and old. One book that was particularly close to the heart of the author himself, who died in 1991, is The Lorax, a story whose ecological message was nearly a decade ahead of its time when it was first published in 1971, and which is more relevant than ever today, over forty years later.

Now, following the success of other Dr. Seuss adaptations, the 3D animated film The Lorax is coming to our theaters, stretching what is in itself a very short story to 90 minutes, and unfortunately diluting the important message of the story a bit. The film is set in the town of Thneedville, where real plants of any kind have long been a thing of the past. In their place are gaudy plastic plants, which of course produce no fresh air. This is provided by the nasty Aloysius O`Hare, who rakes in millions with the bottled air. And of course he cares a lot that there will never be real plants in Thneedville again. Too bad young Ashley wants nothing more than to see a real tree for once, a wish that Ted, who adores her, is determined to grant her. To that end, the twelve-year-old boy even ventures into the dangerous wasteland outside of town, home to the mysterious Once-ler who supposedly knows the truth about the missing trees. Only if Ted knows the Once-ler's story can he possibly succeed in planting a real tree in Thneedville. But O`Hare, of course, wants to prevent that at all costs...

The Lorax not only tells the story of Alex and his efforts to bring the trees back to Thneedville, but also the story of the young inventor who, despite his inherently good heart, is responsible for the disappearance of the trees, even though the Lorax, the lovable spokesman for the trees, has tried to convince him of the beauty and importance of nature. This part of the film has a lot of charm, largely due to the lovable characters like the Lorax and the cute Bar-ba-loots. The Seuss-typical design, which is very colorful and a bit surreal, also has a high show value here. In addition, the makers have managed a very special coup, which gives the film a very special touch: as a narrator for the Lorax could be won not only in the English language version US actor Danny DeVito. DeVito also took over this part in the versions for the foreign market, i.e. also for the German dubbing, with the help of texts written down in phonetic script. Although this makes the Lorax a little harder to understand than the other characters, he also gains a lot of charm and originality.

With the help of somewhat very simple songs and some very pretty gags, the eco-message of the story has been worked up in a very child-friendly way, which should work quite well for small viewers in particular. However, and this is a small weakness of The Lorax compared to other animated films, this Dr. Seuss adaptation is just not a film for the whole family, but a pure children's film. Unlike Ice Age, I - Simply Incorrigible and Co. the animations, the humour and the songs are so clearly aimed at children that the adult companions are only entertained to a very limited extent.

In addition, the human characters, especially villain O`Hare, do not seem very appealing, which somewhat detracts from the overall plotline around Ted and his attempts to impress Ashley. While there are some funny scenes here as well, overall this part of the film feels too over-the-top, too focused on 3D effects, and too strained to exude the same charm inherent in the plotline surrounding the Lorax and his efforts to save the beautiful Truffula Valley.

The Lorax is, on balance, a nice children`s movie with some charming characters, occasionally very amusing ideas, and a good message. However, it lacks the igniting spark that turns a nice movie into a wonderful cinematic experience. But the pleasure of hearing Danny DeVito speak German alone consoles over many a weakness. Therefore: for small Dr. Seuss fans and tree lovers up to 9 years absolutely worth seeing!