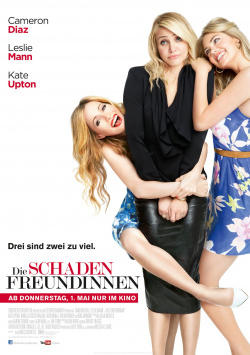 Actually, New York lawyer Carly Whitten (Cameron Diaz) was never the type for a steady relationship. She had fun with men, but as soon as things got a little more serious, they broke up. With Mark (Nikolaj Coster-Waldau) it is somehow different. After a short time she is head over heels in love and even wants to introduce Mark to her father (Don Johnson). But then she finds out by chance that her prince charming has been married for a long time. But even more than Carly, Mark's wife Kate (Leslie Mann) is horrified by her hubby's infidelity. By talking to the side chick, she hopes to find out what went wrong in their marriage. This first meeting develops into a somewhat strange friendship, which takes on a whole new quality when the two women discover that Mark is having yet another affair with buxom sexpot Amber (Kate Upton). They decide to tell the young woman the truth about Mark and thus get her on their side. As a threesome, they seek revenge on the unfaithful philanderer. But will they be able to resist his charm, which they have all fallen for once before?

With The Damage Friends, Nick Cassavetes, who tends to specialize in sentimental material such as On My Sister's Life or Like A Single Day, ventures into purely comedic material for the first time. However, he uses too many familiar ingredients to be really convincing. This starts with the cast. Cameron Diaz as well as Leslie Mann play like you have seen them several times before in other movies. When the third member of the cast, model Kate Upton, makes her first appearance as a well-proportioned bikini beauty with breasts bobbing in slow motion, it quickly becomes clear that she wasn't necessarily hired for her undiscovered acting talent. And rapper Nicki Minaj, who is very popular with younger audiences, also seems to have only been given the small supporting role because of her popularity, which she completes with a monotone voice and petrified facial expressions. So there are really no real acting revelations.

And also dramaturgically the comedy offers no surprises, the plot reminds very much of a modernized version of The Devil's Linen Club. Enriched with a lot of overused corny jokes and a lot of shrill chatter the movie squanders a lot of its potential. And that is definitely there. Even though the story isn't new and the actors and actresses aren't necessarily at their best, there are several very funny and charming moments, which are especially created by the well-harmonized interplay between Cameron Diaz and Leslie Mann. But for every good laugh that these two disparate characters produce, there is at least one moment where you can only roll your eyes in annoyance. There would have been guaranteed more in it.

Nonetheless, it must also be said that The Damage Girlfriends serves its target audience quite well. For what for some is a lack of originality, for others is just what they expect from such a female comedy. No big head cinema, simple gags and a little something for the eye - just a nice escape from reality. And that's all well and good. It just would have been nice if the film didn't use such one-dimensional images of women and if maybe a little bit more of the feeling Cassavetes brought into his earlier films would have been noticeable here as well. Nevertheless, if you just want to switch off with a glass of Prosecco and could laugh about comedies like the second Sex and the City movie or The Devil's Linen Club, The Damage Girlfriends could also offer you almost two hours of amusing entertainment. And for such viewers then also applies: worth seeing with small restrictions!

Cinema trailer for the movie "The Damage Girlfriends (USA 2014)"
Loading the player ...