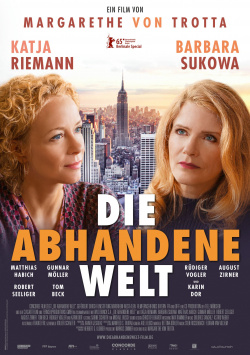 Singer Sophie (Katja Riemann) is astonished when her father (Matthias Habich) shows her a picture of the American opera diva Caterina Fabiani (Barbara Sukowa), who looks just like her recently deceased mother. When he asks her to travel to New York to make contact with Caterina, Sophie reluctantly agrees, believing that her father has gotten caught up in his grief. But when she meets the celebrated artist in New York and she meets her with extreme rejection, Sophie begins to suspect that the resemblance may not be a coincidence after all. A visit to Caterina's mother (Karin Dor) actually leads her to a long-hidden family secret. But she has no idea of the extent of the secret...

With Die abhandene Welt Margarethe von Trotta has directed a very personal film in two respects. Firstly, for the first time she has brought two actresses together in front of the camera, whom she holds in high esteem both personally and professionally. And since both women, Katja Riemann and Barbara Sukowa, also share a passion for music, von Trotta has incorporated this into the film and given the actresses' musical skills room to unfold. This is more of a tribute to Riemann and Sukowa and plays only a subordinate role in the actual story. As a viewer, you notice this, too, because the vocal interludes sometimes seem a bit forced into the action and slow down the already slow narrative flow even more. But this is only a minor flaw in an otherwise extremely accomplished film.

The second aspect that makes The Lost World such a personal work is von Trotta's personal background, which has had a strong influence on the story. After the death of her mother, the filmmaker was contacted by a woman who turned out to be her sister, whose existence Margarethe von Trotta had not known about until that point. At a first meeting, the clear resemblance of the previously strange woman to her mother became apparent - just as it is the case with Caterina in the film.

This personal closeness to the story is positively noticeable in the film in every respect. The production is sensitive, but at the same time very stirring. The emotional level of the plot is delicately worked out without coming across as too striking or too cerebral. One notices that something is being told here that was close to the director's heart, where it was not a matter of doing justice to a historical person as in "Hannah Arendt" or "Vision", but of processing something very personal. The result is a very beautiful, very well acted and atmospherically dense drama, which has small lengths here and there, but overall is clearly one of Margarethe von Trotta's stronger films. And for that, all lovers of sophisticated entertainment cinema from Germany get a very clear: worth seeing!

Cinema trailer for the movie "The Lost World (Deutschland 2015)"
Loading the player ...