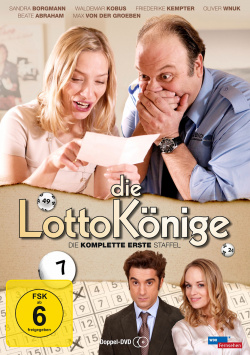 Content: There is an acute shortage of money in the König family. Constantly father Rudi (Waldemar Kobus), a cash-in-transit driver, must borrow the one or other euro note from his colleague Bülent (Eray Egilmez), while mother Claudia (Sandra Borgmann) regularly pumps her sister, the hairdresser Elfie (Friederike Kempter). But then luck finally seems to be in their favor: their little lottery community, consisting of Rudi, Claudia, son Theo (Max von der Groeben) and Rudi's mother Helga (Beate Abraham), actually hits the lottery jackpot of 12 million euros. But the initial euphoria over the win is somewhat dampened when Rüdiger Rössler (Oliver Wnuk), psychologist and winner's advisor to the lottery company, shows up and advises the couple to keep the win a secret, even among close friends and family, and to keep spending to a minimum. So Rudi has to go on with his unloved job and put up with his annoying boss (Petra Nadolny), Claudia has to lie to her sister and even son Theo has no idea that he is actually a millionaire. But as difficult as it was to cope with everyday life without money, the more complicated it is for Rudi and Claudia to go through life as secret millionaires.

The Lotto Kings is based on the Austrian comedy series Die Lottosieger. For the German version, the plot was moved to Essen and enriched with a lot of Ruhrpott charm. With charismatic actors, where especially Waldemar Kobus as the biggest Marius Müller-Westernhagen fan in the world quickly has all the sympathy of the audience on his side, and some very amusing dialogues, Die Lottokönige fit easily into a series with other very popular German comedy series such as Ritas Welt.

Admittedly, some characters, like the extremely nosy and exceedingly unpleasant neighbor of the kings, are a bit too overdrawn and some scenes are too cramped for comedy, so that especially here the laughs tend to be missing. But such little hangs are then always ironed out again with very funny moments and a lot of charm. When Rudi has to deal with the musical passion of his son Theo, named after Westernhagen's greatest film success, when the shy Rüdiger adores Elfie and thereby puts his foot in his mouth, or when the attempts to hide the lottery winnings lead to many a white lie, which in turn of course cause a lot of chaos in the lives of Rudi and Claudia, then it becomes clear where the strengths of this series lie.

If you're just looking for nice, entertaining comedy entertainment from Germany, and can overlook some weak jokes, but get likeable characters, some nice running gags and infectious Ruhrpott charm, you can rejoice with the Königs about their lottery win and be truly royally amused by their attempts to hide it. Recommended!

Picture + Sound: The series presents itself on DVD in good TV quality. The picture has a decent level of sharpness, the colors are coherent and soiling or image distortions are sought in vain. Apart from dialogue and music, the sound hardly has anything to offer that could take up the surround channels. For a comedy series, however, the whole thing is perfectly adequate. Good.

Extras: On the second DVD there are just under 30 minutes of sometimes more, sometimes less amusing outtakes from all six episodes of the first season to see. In addition, there is an entertaining interview with Waldemar Kobus and Sandra Bormann (approx. 15 min.), as well as another interview with actress Friederike Kempter. Good.

Conclusion: The Lotto Kings is a nice comedy series, in which not every gag sits and which also can not score with special profundity. But thanks to the sympathetic actors, the amusing initial idea and a lot of Ruhrpott charm provide the six episodes of the first season quite for a good mood. If you like series like Rita's World, you will certainly be able to laugh heartily about the stories about the lotto kings. In addition to the six episodes, the double DVD also offers amusing bonus material in good technical condition. Therefore applies to friends of German comedy series: Recommendable!