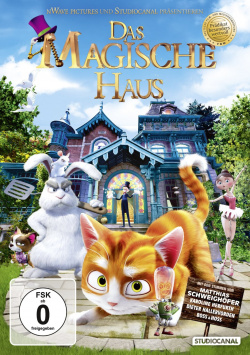 Film: Actually the little tomcat Thunder (spoken by Matthias Schweighöfer) was so much looking forward to a nice trip. That this ends with being abandoned by its owner, the house tiger did not suspect. In search of a new home, Thunder ends up in an old villa, from which the grumpy rabbit Jack and the mouse Maggie (Karoline Herfurth) immediately kick him out again. But Thunder doesn't give up, because finally a storm comes up and he urgently needs a roof over his head. When the owner of the villa, the kind magician Lawrence (Dieter Hallervorden), discovers him, the old man welcomes the little cat with open arms - much to the chagrin of Jack and Maggie. Thunder thinks he has found the perfect home here. But when Lawrence has to go to hospital after an accident, this dream seems to be over. Because not only are Jack and Maggie trying everything to get rid of the unloved roommate. To make matters worse, Daniel, Lawrence's nephew, tries to sell the old house and deport his uncle to the old people's home. And that must not happen under any circumstances...

"The magical house" is after the two adventures of the lovely turtle Sammy another child-friendly 3D animated film by the Belgian Ben Stassen. As with his earlier movies, this work is also visually very well done. There are countless great 3D effects and some very charming figures, which have been very enchantingly implemented. But even "Das magische Haus" can only convince to a limited extent. Again, Stassen didn't incorporate many of his own ideas into the script, but obviously made use of them in other works. It is certainly no coincidence that Thunder is not only reminiscent of the boot-cat from the "Shrek"-movies because of the colour of his fur in some scenes. And also the similarities between the light bulb male Edison and Daniel Düsentrieb's little helper cannot be denied. Memories of "Toy Story" also come back to some of the inhabitants of the magical house.

Such similarities would have been far less serious if Stassen and his co-authors had conjured a more original story out of the hat. The fact that many children don't care if the story is predictable, the characters are changing clichés and many gags are old lamellas shouldn't be an excuse for such a lack of imagination. There are too many examples of children's films in which the makers have really made an effort to let their creativity run wild. Unfortunately there is not much of this to be felt in Stassen's films and "The Magic House" is no exception.

What works much better than in "Sammy's Adventure 2" is the timing. The story has a lot of tempo and very few pitfalls. And most gags are implemented in such a way that they can really ignite. This way some of the weaknesses are well overlooked and the entertainment value is significantly increased. That doesn't make the turbulent adventure a masterpiece. But exciting, funny and lovable entertainment for children between 5 and 9 years offers "The magical house" any time. And for that there is, with small exceptions, a clear one: worth seeing!

image + sound: The image of the Blu-ray has a pleasant depth and a very high overall sharpness. Even the smallest details come into their own. The colours are mixed very powerfully and also the contrasts are excellently co-ordinated. Like the picture, the sound presented in DTS-HD Master Audio 5.1 also leaves an overall positive impression. A successful three-dimensionality, many rich sound effects and the clearly understandable voices provide a first-class sound carpet. Very good!

Extras: The bonus material consists primarily of short promotional material that does not really provide in-depth information. There is a German Making of (ca. 10:08 min.), a short excursion about "Synchronizing for Beginners" (ca. 2:03 min.), as well as four featurettes, in which the speakers present their characters (ca. 5:30 min. in total). Finally there are magic lessons with Boss & Hoss (ca. 2:08 min.) and with Matthias Schweighöfer & Karoline Herfurth (ca. 3:40 min.).

Fazit: "Das magische Haus" does not necessarily captivate with originality, but offers small viewers enough wit and excitement for a magical home cinema afternoon. The 3DBlu-ray offers the film in both the 3D and the classic 2D version. Picture and sound quality are very good, only the bonus material is very superficial. Nevertheless: a really nice film for children in first-class technical implementation and therefore absolutely recommendable!