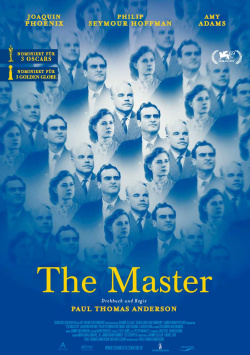 America just before the beginning of the 1950s: World War II is over and the country is in a period of change. Everywhere there is hope for a better future and an interest in the new, in change. But there is also uncertainty, which deprives many people of the necessary support in their lives. One of them is the former soldier Freddie (Joaquin Phoenix), who after his return from the war falls into a hole of depression and mental emptiness, which he tries to fill with the help of alcohol and fleeting female acquaintances. But it's not until he meets the charismatic Lancaster Dodd (Philip Seymour Hoffman) that the uprooted Freddie finds a new purpose in life. He follows the self-proclaimed philosopher, known only as The Master by his ever-growing community of believers, and soon becomes Dodd's right-hand man. A friendship based on respect and fascination develops between the disparate men, but it soon begins to show cracks when Freddie begins to question some of his Master's methods.

Five years after his multi-award-winning There will be Blood, Paul Thomas Anderson makes an impressive return with his sixth feature film, The Master. His drama is impressive because it defies many expectations and always goes its very own way, which often proves to be extremely unwieldy and not exactly crowd-pleasing. Although Boogie Nights and Magnolia were already unconventional in their own way, Paul Thomas Anderson has staged them in a much more crowd-pleasing way than his latest There Will Be Blood. The Master even takes this a step further: the film forgoes a clear narrative structure and at times has an almost episodic feel to it. The main characters are completely dysfunctional and offer little in the way of sympathy. This makes the film a little exhausting at times and probably won't go down particularly well with those viewers who are looking for a certain level of ambition, but at the same time just want to be entertained.

But that doesn't seem to be Paul Thomas Anderson's point either. If it were, he would have taken the easy way out and directed a cult drama even more obviously based on Scientology founder L. Ron Hubbard. Instead, he has drawn a portrait of an extremely unstable human being that is not only dramaturgically complex but, as with his earlier films, wants to be understood as an interplay of many different elements that are not always obvious. The choice of film material or lenses, the editing, the music, the lighting - all this plays just as big a role for Paul Thomas Anderson as the actual screenplay and the performance of the actors. This is on a very high level, with not only Joaquin Phoenix and Philip Seymour Hoffman, but especially Amy Adams delivering nothing but first class.

The Master is a great example of using the medium of film as a work of art, requiring more from the viewer than simple consumption. Interrelationships of various elements must be understood, content and messages must be reflected upon, and some prior knowledge of the history of America in the early 1950s, as well as philosophy and psychology, is also useful. This is qualitatively highly demanding and in its own way also masterfully implemented. But the film does not offer real entertainment. If you like American art house cinema of the demanding kind, if you like to deal with films more intellectually than emotionally and if you appreciate the films of Paul Thomas Anderson in general, you should definitely watch this drama. But if you're looking for sophisticated yet accessible cinematic entertainment, or if you're hoping for an exciting story, you might well cut your teeth on this one.