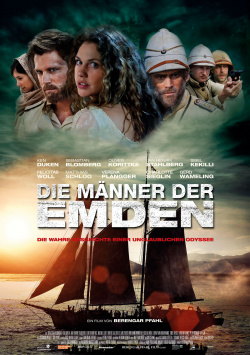 The Men of the Emden

In 1914, the first year of World War I, the cruiser Emden of the Imperial Navy has gained a reputation for being feared and respected in equal measure through cunning maneuvering, but also through fairness to the enemy. This reputation is abruptly shattered when, during a mission on a small English atoll in the Indian Ocean, the Emden is sunk ashore by an Australian destroyer in full view of her crew of barely fifty. But the men of the Emden do not give up so easily. Under the leadership of Captain Hellmuth von Mücke (Sebastian Blomberg) and the officers Friedrich von Schulau (Jan Henrik Stahlberg) and Karl Overbeck (Ken Duken), they succeed in capturing an old sailing ship with which the men want to make their way to Germany. But the way is long and when the neutral Dutch Sumatra refuses to help, the fate of the crew seems to be sealed. But von Mücke is not prepared to give up the lives of his men.

The Men of the Emden tells the true story of the marines who, after their ship was destroyed in 1914, took on an incredible, dangerous and almost impossible journey to get back to their homeland. Director Berengar Pfahl has filmed the exciting story on locations in Greece, Sri Lanka, Tunisia, Malta and Germany in partly impressive pictures. His film is actually conceived as a 180-minute two-parter for television, which will first be exploited in a nearly two-hour version in the cinema. And this is exactly the problem of the film. Although its images absolutely justify a theatrical release, dramaturgically it comes across as good TV merchandise. In addition, the theatrical version is in some places clearly noticeable that here has been shortened and tightened.

That is not to say that The Men of Emden is a bad film. Even if some of the supporting actors deliver their smaller roles a bit unmotivated, the main actors, especially Sebastian Blomberg and Oliver Korittke, are beyond any doubt. Especially in the scenes where the tensions between the men become more and more intense in the face of hunger, thirst and desperation, the film is not only visually, but also fully convincing in terms of acting. It is at moments like these that Berengar then manages to let real tension build, which noticeably adds to the entertainment value of the adventure story.

Nevertheless, in the end the feeling remains of having seen something unfinished, which is simply better off on television than in the cinema. The elaborate production, the good actors and the partly very picturesque locations lift The Men of Emden in some respects above the level of big event two-parters. But the dramaturgical realization is just not great cinema and leaves a rather unsatisfactory overall impression, which, however, in the TV broadcast of the long version could still change for the better. Therefore applies: in the cinema only with deductions worth seeing!

Cinema trailer for the movie "The Men of the Emden (Deutschland 2012)"
Loading the player ...