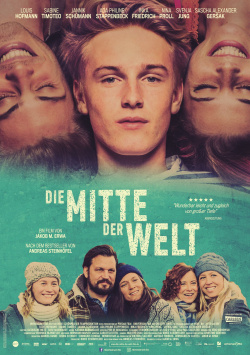 The Middle of the World

Actually, Phil (Louis Hofmann) sees himself as a normal 17-year-old boy from the country - just a bit gayer. He had a very special relationship with his twin sister Diane (Ada Philine Stappenbeck) as a child. This was also enormously important due to the absence of a father and the always brief guest appearances of the lovers of her maladjusted mother Glass (Sabine Timoteo). But now, when he returns home after spending several weeks at a language camp, Diane has completely reverted to herself. And Glass doesn't really want to talk to him about what happened while he was away either. Only his best friend Kat (Svenja Jung) gives Phil back a piece of normality. Nevertheless: everything is somehow different and is turned completely upside down when Nicholas (Jannik Schümann), a new student, joins Phil's class and he falls head over heels in love with the new guy.

The Middle of the World by Andreas Steinhöfel quickly became a bestseller in bookstores. Jakob M. Erwa has tried to adequately transfer the essence of the acclaimed novel about the pitfalls of growing up to the screen. In places, he succeeded really well. But at other points, the film suffers from the very problems that many book adaptations fail to address. There simply isn't enough time to develop all the characters and the story with all its facets. When the story is quite complex, this often leads to a film adaptation that either seems a bit superficial or simply overloaded. In this case, it's the case that parts of the story work very well and can develop really well and engagingly. Others, however, come across as a bit flat and maybe even superfluous, especially for viewers who don't know the book.

Another problem is the drawing of the characters, which in some cases turned out to be arguably clichéd. It may be that this works well in the book, but in the film version it seems rather distracting and at times a bit annoying. Sure, the good intentions are always clear and especially the engaging imagery makes up for many an immature cliché. Also the actors are convincing over long stretches, even if especially Louis Hofmann's play at the beginning seems a bit too slick and put on - which may be due to the character, though, who, after all, is still endowed with a certain naivety and unadulterated joie de vivre at the beginning, which are shaken and put to a hard test by various events in the course of the story.

The Middle of the World is a good film, but nothing more. The complexity and depth that is actually in the story is rarely achieved here. Still, Jakob M. Erwa has succeeded very well in some scenes to make the difficulties of growing up and finding one's place in this world believable. And that's why, despite some weaknesses, the bottom line is a very clear: Worth seeing!

Cinema trailer for the movie "The Middle of the World (Deutschland 2016)"
Loading the player ...