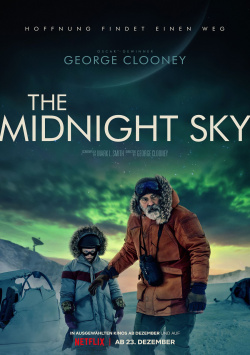 Augustine (George Clooney) is the only scientist left at a research station in the Arctic, while his colleagues have flown home to their families in the face of the impending end of all life on Earth. But Augustine has one more task he must complete: He must make contact with astronaut Sully (Felicity Jones) on NASA's "Aether" spacecraft to prevent her and her team from returning to Earth from their Jupiter mission. But the antenna of his research station is too small. Together with little Iris (Caoilinn Springall), who seems to have been left behind in the hustle and bustle of the evacuation, the terminally ill Augustine must embark on a perilous journey to the nearest station in order to make contact with the spacecraft in time.

With his latest directorial effort, "The Midnight Sky", the film adaptation of Lily Brooks-Dalton's acclaimed novel "Good Morning, Midnight", George Clooney has landed not in theaters but directly on Netflix. That's a shame, because it's the visuals that are one of the very strengths of this dystopian drama. Both in the scenes that take place in the Arctic, as well as in the moments on the spaceship, Clooney manages to visually build a fascinating, but also oppressive atmosphere. Thus, as a viewer, you remain riveted until the end, even if some moments are told very slowly and the overall dramaturgical structure proves to be a bit unwieldy.

Worthy because two - strictly speaking even three - different stories are told here, which often seem like watching completely different movies. Not only are the glistening bright snowscapes of the Arctic and the darkness of outer space vastly different visually. Also, the scenes that take place in these locations are relatively long, so that you are torn out of the other storyline for a long time. Every now and then the whole thing is interrupted by flashbacks to the life of the younger Augustine and his great love. And all this doesn't really fit together. That only changes at the end, when the individual set pieces are brought together very well by a twist.

Even though the twist is predictable in a way, it works really well on an emotional level. Those final moments are so strong that they really make the bumpy road to get there worth it. That being said, there are other very rousing moments that give the film its special touch. If you're expecting fast-paced sci-fi apocalypse action after seeing the trailer, you're guaranteed to be disappointed. That's because Clooney's film is overall very quiet, leaves a lot unsaid, and only rarely tightens the suspense screw noticeably. Nevertheless, the film - at least for me - is never really boring, as it reached me emotionally all along the line.

"The Midnight Sky" is strongly acted, visually superbly realized and culminates in an extremely moving finale. That makes the film - despite numerous mixed to negative reviews - for me: absolutely worth seeing!

"The Midnight Sky" is available now on Netflix and will run on 09.03.2021 also at the drive-in Gravenbruch on the big screen

Cinema trailer for the movie "The Midnight Sky (USA 2020)"
Loading the player ...