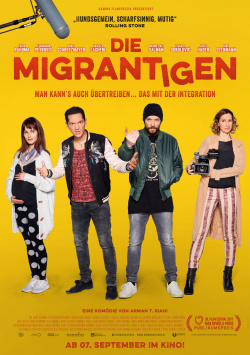 During the shooting of a reportage in a problem district of Vienna, TV editor Marlene Weizenhuber (Doris Schretzmayer) encounters Omar (Faris Rahoma) and Tito (Aleksandar Petrovic), who seem to confirm precisely the prejudices associated with young men with a migration background. That would make them the perfect protagonists for a TV documentary series. And indeed, when the two of them lead the TV team through their neighborhood, confronting them with illegal business, prostitution and rival gangs, the ratings skyrocket. The only problem: Omar's real name is Benny and Tito Marko. Both are true Viennese, who have taken the liberty of harmless fun that gets completely out of control. And when the vertigo threatens to fly up, there is much more at stake for the two friends than just their newly found TV career…

The basic idea behind "The Mirantigens" is really good and funny: The fact that a TV team on the hunt for odds only wants to see what gives them the odds and that in a lurid docu-soap in a jumble of clichés and prejudices there is no room for a differentiated view, is unfortunately not something that can be called fiction. Faris Rahoma and Aleksandar Petrovic give the pseudo-checkers such a wonderful overdraft that their fraud should have been discovered after only a few moments. But the TV editor doesn't see this because she only sees herself climbing the career ladder with big steps by exploiting the fate of these two obviously very simply knitted migrants.

In some scenes all this is full of ironic bite and a bitterly evil deeper meaning. If director Arman T. Riahi had managed to consistently pull these off, the comedy would have had what it takes to become a cult film. But unfortunately the movie already runs out of breath after the first third. There are some really good, funny and also clever moments in this part of the movie, too. But there are also scenes in which the humor seems to be too good and in which the movie doesn't quite seem to be able to decide whether it wants to be a comedy or maybe a social drama after all.

So it comes to some extremely weak moments as well as to some humor-free lengths. And this also affects the overall impression, which shrinks from the initial "great" to a somewhat disappointed "well". "The Mirantigen" is not a bad movie, but the bottom line is far from what it could have been. And that's why there is only one left with restrictions: Worth seeing!

Cinema trailer for the movie "The Migrants (Österreich 2017)"
Loading the player ...