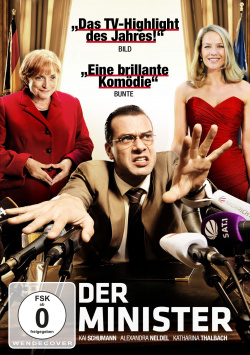 Content: It was the biggest political scandal in recent history when Karl-Theodor zu Guttenberg, a great CSU hopeful and political prodigy, lost not only his doctorate but also all his political offices in a plagiarism affair. His career in the German Bundestag was steep, but also extremely short. And it provides the perfect material for a political satire. Producer Nico Hofmann, who together with director Uwe Janson created the TV comedy "Der Minister" from the scandalous story, has also recognized this.

The film is, of course, not a serious and accurate treatise on events, but rather a free interpretation with a few satirical side blows to politics and the media. At the centre of the comedy is Franz Ferdinand von und zu Donnersberg (Kai Schumann), who already had difficulties as a pupil with putting his own ideas to paper. His best friend Max Drexel (Johann von Bülow) has been his ghostwriter ever since. Without Max's help, Franz Ferdinand would never have been able to go to school or university. And so it is only natural that he should also realise his political ambitions with Max at his side. While Franz Ferdinand and his wife Viktoria (Alexandra Neldel) are at least able to enthuse the tabloid press with their charisma, Max's words ensure that the young politician's political reputation is also increasingly enhanced. But Franz Ferdinand cannot leave a real impression on Chancellor Murkel (Katharina Thalbach). But there is also a solution to this problem: Franz Ferdinand needs a doctorate. Max actually manages to get his buddy to do his doctorate and is appointed minister a short time later. But this is only the beginning of the problems...

"The Minister" can primarily score with his occupation. Kai Schumann is not only visually an excellent cast for the plagiarism minister and Alexandra Neldel is also convincing in this rather comedic role. A wonderfully greasy Thomas Heinze and a brilliant Walter Sittler in his small role as a bossy father are just as convincing as the actual leading actor Johann von Bülow, whose rather grounded and actually completely normal Max represents a perfect counterweight to Franz Ferdinand von und zu Donnersberg and the entire political circus surrounding him. In some moments these well chosen actors are allowed to act with a refreshing bite, which makes the comedy in its best scenes an absolutely unerring satire on the Guttenberg scandal, on German politics and also on the media world.

But unfortunately this bitterness is felt much too rarely. Too often, the comedy relies on the fact that even a slight change in the names of those involved or of well-known TV stations and press organs is enough to make the audience laugh. But this is exactly where the script proves less originality and cleverness than can be felt in the well done scenes. It's just as unwise to make the murk out of Chancellor Merkel as it is to simply add a few more numbers to RTL II. Even with a more subtle implementation, the audience would surely have recognized who or what is to be parodied right now.

"The Minister" therefore leaves a somewhat ambivalent impression in the end. On the one hand an excellently played satire with really funny moments, on the other hand a somewhat too flat conversion and a lack of courage for malice. Still: the obvious joy of the actors and the well done scenes are enough to make the movie worth seeing, despite its weaknesses and missed chances!

Picture + sound: The film produced for Sat1 has an absolutely satisfactory picture and sound quality for a TV comedy. Visually the whole thing convinces with a good to very good overall sharpness and a warm, powerful colouring. The sound has, which is not unusual for this genre, mainly dialogues and music to offer, but they are powerfully converted and well coordinated, which is why the otherwise rather reserved Dolby Digital 5.1 mix leaves a very positive impression. Good.

Extras: Besides a worth seeing Making of (approx. 14 min.) the DVD has about 4 minutes of edited scenes and 6 minutes more, sometimes less amusing outtakes to offer. There are also three short clips. Chancellor Murkel talks about intellectual property (ca. 0:37 min.) and Franz Ferdinand gives an interview (ca. 2 min.) and informs the audience about the copyright (ca. 1 min.).

Fazit: "The Minister" is an amusing satire that never fully exploits its potential. Kai Schumann is really perfectly cast in the main role and the other actors are also in an obviously good mood, which clearly increases the entertainment value of the comedy. A little more bite wouldn't have hurt the whole thing. The DVD presents the TV movie in good technical implementation, the additional material is clear, but quite worth seeing. Anyone who likes German comedies with a satirical touch should not miss this film, which of course only reminds of real events by chance. Recommended