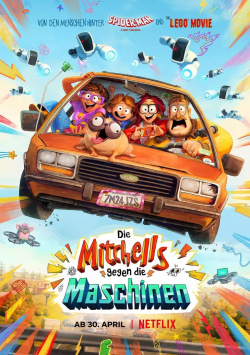 The Mitchells vs. the Machines

Katie Mitchell can't wait to finally get away from her family so she can go to film school. She and her father Rick used to be one heart and soul, but those days are long gone. Now for Katie, saying goodbye to her family is the best thing that has happened to her in a long time. However, the fact that her parents are cancelling her flight to drive her to college themselves on one last family road trip puts a bit of a damper on the anticipation. And if that wasn't bad enough, a robot apocalypse breaks out at that very moment - and the Mitchells, of all people, are the only ones who could win the battle against the machines in favor of humanity....

"The Mitchells vs. the Machines" is another movie that was supposed to be in theaters (under the title "Connected - Family Connects") before it ended up migrating to a streaming service - in this case Netflix. And that's a shame, really. Because what Mike Rianda and be co-director Jeff Rowe, who previously worked together on the acclaimed animated series "Welcome to Gravity Falls", have done here, along with the producing team of Phil Lord and Christopher Miller (among others. "Spider-Man: A New Universe"), is visually wonderfully weird and playful and also otherwise wonderfully entertaining.

So often different animation techniques are combined, so that again and again regular image collages arise, which are above all one: extremely funny. The gag density is extremely high, but the film also manages to include some really emotional moments here and there. Especially the relationship between father and daughter is described very nicely with all its ups and downs, without ever seeming too maudlin. Here the makers have really done everything right.

Yes, there is also quite an aspect that one could criticize, and that is the story. It comes across as a bit very conventional. What is told here is not really original. But it is the "wie" that is decisive here. When you're overwhelmed by such a diverse flood of imagery and can laugh tears all the while, it really doesn't matter if the plot is utterly predictable. Certainly, more could have been made of the critique of our dependence on digital media with a little more bite. But such a shortcoming is easily made up for by the creativity of the production.

"The Mitchells vs. the Machines" is not only great animated fun, but more generally a really great treat for the whole family. Quirky, full of amusing ideas and really, really funny. And: Despite a rather impressive running time of almost two hours, it's never boring! For me one of the highlights of the last months and therefore also in any case: Absolutely worth seeing (both in the original English version, as well as in the successful German dubbing)!

"The Mitchells against the machines" is since 30. April 2021 on Netflix

Cinema trailer for the movie "The Mitchells vs. the Machines (USA 2020)"
Loading the player ...