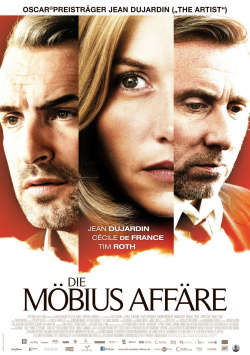 In Monaco, the Mecca of the rich and beautiful, the Russian top spy Grégory Lioubov alias Moïse (Jean Dujardin) and his team are supposed to meet the French-American financial expert Alice (Cégory Lioubov alias Moïse).eacute;cile de France) to work for them as an undercover agent and obtain information that can be used against the Russian oligarch Ivan Rostovski (Tim Roth). Alice, who was expelled from the USA as co-responsible for the Lehmann bankruptcy, is promised in return that she can return to her old homeland. The plan seems to work out at first when Alice manages to get close to Ivan and win his trust. Moïse has no idea that his undercover agent is already working for the CIA and has now set out on an extremely dangerous double-cross. But he senses that something is wrong and therefore breaks one of his most important rules: he approaches the woman whom he has so far only observed from the background. A very special bond develops between the two in a very short time, which could have fatal consequences not only for Alice…

The Möbius band is a geometric figure similar to a double ring, but with only one surface and one edge. There is no beginning and no end, no clear inside and outside. The characteristics of the Möbius band can be perfectly transferred to the story of Éric Rochant's multi-layered espionage thriller. In "Die Möbius Affäre" there is no clear differentiation between good and evil and also different genres seem to merge seamlessly into each other and mix to a very own whole. While at first he builds up the story completely according to the pattern of classic espionage thrillers, later he indulges so extensively in the tingling romance between Moïse and Alice that the film here seems more like a passionate love drama.

Background comments on the financial crisis ensure that the story, despite a rather old-fashioned staging, looks very contemporary. A great camera work, atmospheric music and the convincing play of the actors can also book the film for itself. The fact that Oscar winner Jean Dujardin and Cécile de France are sparking is not necessarily in the way of a positive overall impression. Nevertheless, in the end, such real enthusiasm simply does not want to materialize. The scenes in which Moïse brings Alice to ecstasy are, despite a very tender, aesthetic realization, too lengthy and thus lose much of the effect they radiate at the beginning. Here Rochant should have spent more time on it to make it clearer why the spy of the pretty financial expert falls into such a trap. That he shoots all the rules into the wind after only one eye contact, which have made him a real professional in his years as a spy, is not easy for the viewer to understand.

The deep emotionality, which flows into the moments between the two secret lovers, unfortunately misses the production otherwise. Thus, despite the good actors, the characters remain a little one-dimensional and inaccessible. This in turn has the consequence that the movie as a whole seems a bit bulky, which also diminishes the enjoyment a bit. But the biggest flaw in the Möbius affair is the finale. Even though the movie is a bit emotionally undercooled at times, its nested story is told in a very thrilling way and cleverly constructed. But the last scene between Moïse and Alice just seems flat and much too kitschy in comparison. Especially because the events are actually heading for a dark, but very consequent ending, the last turn is quite disappointing despite a certain goose bump factor.

Even though the positive aspects predominate in the end, the feeling remains that "The Möbius Affair" could have been an even better and more thrilling movie. If you appreciate classic espionage thrillers and don't mind a good portion of romance, you'll get an appealingly filmed and insistently played tension cinema with a few lengths. That's enough, with some small compromises, for a decent one: worth seeing!

Cinema trailer for the movie "The Möbius Affair (Frankreich 2013)"
Loading the player ...