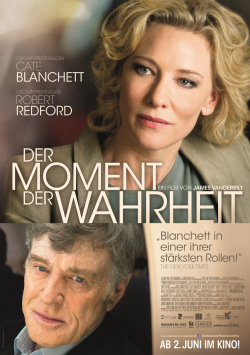 The Moment of Truth

2004: The show 60 Minutes is one of the most renowned and successful news magazines in the US and its anchorman Dan Rather (Robert Redford) is one of the most respected TV personalities in the country. What is reported in this program often makes waves nationwide and can also have an influence on political developments. Producer Mary Mapes (Cate Blanchett) is well aware of this when, in the midst of a presidential campaign, she receives information that could prove that incumbent President George W. Bush, with the help of his influential family, avoided deployment in the Vietnam War at the time. The show Mapes and her team put together hits like a bomb. The election campaign should be decided. But it is not President Bush who is suddenly caught in the crossfire of criticism, but Mapes, Rather and the 60 Minutes team. A bitter battle for journalistic integrity, but also for the professional futures of all involved, begins.

The Moment of Truth is based on the real-life scandal surrounding a report on the news program 60 Minutes in which the show's investigative team failed to prove the authenticity of the memos on which their Bush-critical report was based. When writing experts later exposed the memos as forgeries, it cost producer Mary Mapes her job and correspondent Dan Rather also retired from the CBS network. The fact that the content of the offending report could correspond to reality despite the allegedly falsified memos was no longer of interest to anyone. What was supposed to be the real scandal was not the issue that ultimately made the big headlines.

This story has been adapted by director James Vanderbilt into a tense political drama. Since the screenplay for his directorial debut is based on the book by Mary Mapes, it can be accused of a rather one-sided positioning. And indeed, the film seems to make no secret of representing a distinctly liberal, anti-Republican stance. Perhaps a little more impartiality would have been helpful here, so as not to make itself so vulnerable to critics from the conservative camp. As it is, however, it is little wonder that The Moment of Truth has elicited rather mixed reactions, especially in the U.S., even though the film has almost nothing but positive aspects to offer in its own right.

In terms of acting, there is first-rate quality here, both from lead actors Cate Blanchett and Robert Redford, as well as from supporting actors such as Topher Grace, Dennis Quaid and veteran star Stacey Keach. The already gripping story was executed in a very rousing manner, with the staging in its best moments evoking memories of classics like The Untouchables - even if the film ends up not quite being in the same league as such top-notch journalistic thrillers. And Mary Mape's final plea to the investigating committee is so full of uncomfortable truths about the shitstorm mentality in our society that this scene alone makes the drama an enormously timely and important film, one whose message is worth thinking about a little harder.

The Moment of Truth may have minor lengths and dramaturgical weaknesses. But the film's strengths are powerful enough to console over them. And therefore the film is also for all viewers who appreciate gripping entertainment cinema with claim, then: Absolutely worth seeing!

Cinema trailer for the movie "The Moment of Truth (USA 2015)"
Loading the player ...