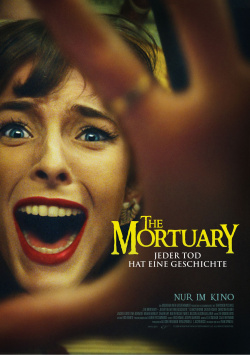 The Mortuary - Every Death Has a Story

It`s not exactly a particularly welcoming place. Nevertheless, young Sam (Caitlin Fisher) wants to take a temp job with undertaker Montgomery Dark (Clancy Brown) in Raven`s End. Here she is to support the somewhat sinister seeming landlord in paying the last respects to the deceased - from preparing the corpses for the funeral service over the last anointing to the cremation in the in-house crematorium. What Sam finds particularly exciting is Dark's statement that every dead body tells its own story. And so the young woman lets herself be told a few particularly dark, eerie stories, while she is led deeper and deeper into the dark corridors of the estate by the undertaker. But Sam also has a tale to tell, one that holds plenty of surprises.

In the best tradition of "Creepshow" or "Stories from the Crypt", "The Mortuary - Every Death Has a Story" tells some eerily beautiful scary stories, which director Ryan Spindell enriches with some disgust effects and plenty of black humor. Like many episodic films, this one has the problem that not all the stories work equally well. There are some very strong moments, but also episodes that drag a bit or just overshoot the mark. It's actually the final story that Sam tells that works the best, and closes the arc to the frame story.

With a very good set and a wonderfully "creepy" Clancy Brown as the eccentric mortician, Spindell manages very well to get the atmosphere just right. It never gets really creepy or tremendously suspenseful. But the references to various genre classics and the wonderfully crazy acting of Brown and co-star Caitlin Fisher alone make the film a lot of fun. And then there are the individual short stories, which are sometimes delightfully weird, but in places just plain gross.

"The Mortuary - Every Death Has a Story" is no masterpiece of modern horror cinema. But it's a film that was clearly made by someone who loves the genre and is good at serving up classic set pieces with a loving wink. It doesn't always hit the mark, but when it works, you're really entertained here. Alone for the final act - but also already for some of the first episodes - there is here only with minor deductions a satisfied: worth seeing!

Cinema trailer for the movie "The Mortuary - Every Death Has a Story (USA 2019)"
Loading the player ...