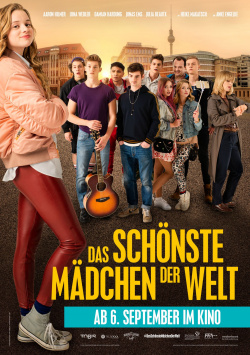 The Most Beautiful Girl in the World

Cyril (Aaron Hilmer) is intelligent, quick-witted and a talented rapper. Actually, the best prerequisites to be popular at school - if it weren't for the huge nose Cyril has to deal with. It makes him an outsider and often the laughing stock of the school. No wonder Cyril doesn't want to go on the class trip to Berlin. This changes abruptly when his new classmate Roxy (Luna Wedler) enters the bus. She doesn't seem to mind Cyril's nose and the two, who are absolutely on the same wavelength, quickly become friends. But it's too bad that for Roxy it's really just friendship, because she has a crush on the shy Rick (Damian Hardung). Pick-up Benno (Jonas Ems) also has it in for the new girl, and Cyril realizes he must act to protect Roxy from sleazy Benno. Reluctantly, he launches a matchmaking scheme that makes Rick look in an extremely good light. But since the in reality is not the brightest light, the hoax soon threatens to blow up.

A Cyrano de Bergerac variation for the Fack Ju Göhte generation - can it work? It can, as Aaron Lehmann proves with The Most Beautiful Girl in the World. Together with Lars Kraume (The Silent Classroom) and Judy Horney, the director has written a chirpy script that, in addition to the familiar set pieces of the classic Edmond Rostand, has some really clever word jokes, charming characters and convincing teen romance to offer. True, the gags are pitched below the belt here and there. But whenever the film threatens to get too raunchy, it's countered by a heavy dose of irony and surprisingly enigmatic humor.

I'm aware, of course, that I'm so not part of the target audience anymore. For me, the best Cyrano adaptation is still Roxanne with Steve Martin. At the latest when Cyril masquerades in best Sido manner and gives his battle raps, then you have to shake your head almost inevitably as a viewer over 30 or over 40. There are people who like that? Who see this as art? Do they really? Well, you don't have to like everything. To cut a long story short: Even though I've outgrown the target group by a few years, the film completely convinced me with its charm and its often surprisingly intelligent wordplay.

This is also due to the fact that with Aaron Hilmer and Luna Wedler two really likeable and pleasantly unused actors were found. They make it absolutely believable why Cyril and Roxy get along so well from the very first moment, why a connection develops between them in which Cyril's big nose plays no role at all. All this ensures that The Most Beautiful Girl in the World has become a really successful comedy for young viewers, which uses many familiar teen movie set pieces, but puts them together in an original, funny and endearing way. For this there is clearly a: Worth seeing!

Cinema trailer for the movie "The Most Beautiful Girl in the World (Deutschland 2018)"
Loading the player ...