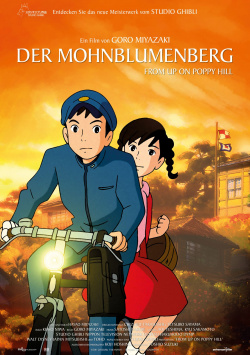 17-year-old Umi from Yokohama already carries a lot of responsibility at her young age. Not only does she go to school every day like the other girls, but she also takes care of her siblings, her grandmother, and the three lodgers who live in her family's mansion. Since Umi's mother works abroad as a doctor and her father has not returned from the war, the young girl has to take care of all these tasks alone. Still, she finds time every morning to raise the flag in front of her house to send a greeting far away - a ritual that does not go unnoticed. For suddenly Umi finds herself the subject of an article in the school newspaper. When she meets Shun, the author of the article, her strictly ordered life changes completely. Not only is she strongly attracted to the boy. She also becomes part of a protest movement by a group of dedicated students who have built a clubhouse in a large wooden building next to the school, which is now slated for demolition. As Umi fights alongside Shun to preserve the Latin Quarter, their feelings for each other steadily grow. But little do they know that a secret from their parents' past binds them very closely together.

With The Poppy Mountain, the world-famous Japanese Ghibli studio makes its usual impressive return. Studio founder Hayao Miyazaki, however, has this time confined himself to writing the screenplay based on a 1980s manga by Kokurikozaka Kara. He has left the direction to his son Goro Miyazaki. Visually, the junior also stays true to the style established by his father. Still, The Poppy Mountain is markedly different from most of Hayao Miyazaki's films. If in his works such as Chihiro's Journey to Wonderland, Princess Mononoke or The Walking Castle the story usually has a fantastic, fairy-tale character, the action from The Poppy Mountain is strongly anchored in reality.

The film is set in 1963, the year before the Olympic Games were held in Japan. It is a time of change, a shift from the chaotic post-war era to economic boom. But it also marks a change from tradition to modernity, expressed here in the effort to tear down the old clubhouse and build something new and more modern there. And it is also a time of upheaval for the main characters in many respects, as they are on the verge of adulthood. At the same time, their lives are also fundamentally changed by the confrontation with their past.

The story that The Poppy Mountain tells is very beautiful and interesting in itself, and the very traditional visuals of the animated film also have a pleasantly nostalgic appeal. However, it proves extremely difficult to define a clear target audience for this film. The visuals tempt to declare it a children's film. But for that the story is simply too complex and not appropriate for the target group. Older viewers, on the other hand, might have a hard time coming to terms with the film's somewhat childish look. Because what still invited to dream and took the viewer into another world in imaginative material like Chihiro's Journey to Wonderland, just doesn't really want to work here anymore. Only the interior of the Latin Quarter is a real feast for the eyes, a place that is simply wonderful and fascinating because of its richness of detail.

The Poppy Mountain is a beautiful film, there is no question about that. Miyazaki fans will get their money's worth here on a visual level. Still, the feeling remains that the film is somehow not fish and not fowl, a difficult work to classify that will thus have a very hard time winning over a larger audience. Nevertheless, there is purely from an artistic point of view a clear: worth seeing!

Cinema trailer for the movie "The Poppy Mountain (Japan 2011)"
Loading the player ...