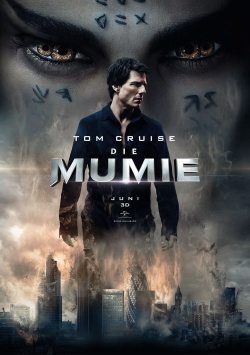 Once upon a time, Ahmanet (Sofia Boutella) was a beautiful Egyptian princess who would eventually follow her father to the throne. But then she was denied that claim, which Ahmanet refused to accept. She entered into a demonic pact and killed her father. But her bloody deed was discovered and she was mummified alive as punishment in a prison far away. There she lay for many centuries, while her name disappeared more and more from the history books. When adventurer Nick Morton (Tom Cruise) and archaeologist Jenny Halsey (Annabelle Wallis) stumble upon her hidden tomb, they unleash a dark force that could become an unimaginable threat not only to them, but to all of humanity.

The Mummy kicks off Universal's planned Dark Universe, which will see some of the very great monster movie classics remade over the course of the next few years. The whole thing is the monstrous counterattack, so to speak, against the superhero movies of Marvel and DC. Celebrity support has been hired for the first planned films: Javier Bardem will become Frankenstein's monster, Johnny Depp the Invisible Man, and Russel Crow Dr. Jekyll and Mister Hyde, a (dual) role he already embodies in The Mummy. A prerequisite for expanding the Dark Universe, of course, is that audiences want to see these monster movies.

To ensure that, heavy guns were brought in for The Mummy. A bona fide megastar was cast in Tom Cruise for the lead role, and director Alex Kurtzmann was allowed to burn a more than tidy budget of $125 million - which you can see in many moments on screen. This version of the monster movie classic is a real spectacle in terms of effects and action, especially in the first third. The plane crash, which was already seen in the trailers, looks extremely rousing on the big screen. In addition, a really good mix of action, horror and humor is convincing here.

However, the film has to struggle with the problems that pilot episodes of (planned) series very often have to deal with: There's just too much that's introduced and established here, which the actual story then suffers from. At some point, it becomes more about the secret monster-hunting organization, led by Dr. Henry Jekyll, than it is about the mummy. And the hunt for Ahmanet is limited to fighting the undead and constantly running through the streets of London or the tunnels under London. While this is entertaining on one hand, it's also a bit tedious on the other. And when the story is unfortunately brought to an end far too conventionally - although there would have been the potential for a really good and surprising shocker finale here - then one is certainly inclined to watch further Dark Universe movies. But a really great anticipation for the next entry in the series, as is the case with many a successful franchise, does not want to set in.

The Mummy is good popcorn cinema. In the first 45 minutes even very good! But unfortunately the film wants to establish a universe that is (still) too big and at the same time tell a story that in the end only relies on repetition and on all too unsurprising clichés. This is entertaining cinema fare - but a real modern monster movie classic looks different. The bottom line is: Worth seeing!