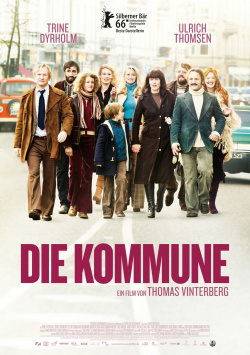 Actually, Erik (Ulrich Thomsen) wanted to sell the large villa he inherited for a profit. But he lets himself be convinced by his wife Anna (Trine Dyrholm) and his daughter Freja (Martha Sofie Wallstr&oslash;m Henningsen) that living here in the posh district of Copenhagen might well have its appeal. But since the house is far too big for them, they decide to form a commune here with friends and acquaintances where they will enjoy living together casually. And that seems to have been a really good idea, at least initially. Shared meals, celebrations, lively discussions, lust and love characterise the commune's everyday life. But then Erik falls in love with the student Emma (Helene Reingaard Neumann) and lets her move into the house, dark clouds gather over the paradise.

With The Commune, Thomas Vinterberg seems to strike a somewhat looser, almost amusing note for once, after the great drama The Hunt and the grand costume romance On the Green Edge of the World. The first minutes of his latest film seem comedic and promise easy-going cinema entertainment that can convince with a lot of 70s feeling and good-humored actors. Despite some rather chaotic characters, you quickly feel at home in this shared flat and are even willing to think that you could definitely imagine living together in such a colourful way. Constantly surrounded by friends, living life to the fullest - what could be wrong with that.

A whole lot! And Thomas Vinterberg wouldn't be Thomas Vinterberg if he didn't reveal that in a very forceful and - on a psychological level - disturbing way. The result, however, is that the titular commune fades almost completely into the background and the film turns into a stirring marriage drama. True, this is superbly acted by Ulrich Thomsen and especially Trine Dyrholm, and superbly directed by Vinterberg. But the many interesting side characters, who are introduced in the first third of the film, fade almost completely into the background and lose more and more importance for the story. This is a shame, especially considering such good actors as Fares Fares. And a big emotional event that then shakes the commune towards the finale doesn't seem as powerful as it would have been if the supporting characters hadn't stepped so far out of the action.

So we are left with a somewhat unbalanced overall picture that consists of very strong individual parts that only want to fit together harmoniously to a limited extent. Nevertheless, on balance, the drama has become really worth watching, which is primarily due to the great actors, but also to the really rousing story. Because the way Anna, who is actually a very strong woman, gives up more and more on herself, out of fear of losing her husband completely and being alone, is extremely upsetting and stirring. So if you can overlook the fact that the film is not the loose comedy it seems to be at the beginning and that the other residents of the commune do not play a supporting role for long stretches, you will be offered a very intense and atmospheric drama that more than deserves a worth seeing.

Cinema trailer for the movie "The Commune (Dänemark 2015)"
Loading the player ...