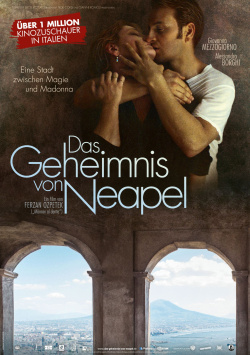 The Secret of Naples

Although it's not really her style, Adriana (Giovanna Mezzogiorno) lets herself be seduced by the younger, attractive Andrea (Alessandro Borghi) after a party. The two experience a night full of passion. Still, Adriana doesn't expect it to turn into anything more than a one night stand. She is all the more delighted when Andrea tells her that he wants to see her again. The renowned forensic pathologist is on cloud nine and can't think of anything else all day but the upcoming date. But Andrea doesn't show up at the appointed meeting place. Nor does he respond to Adriana's calls. When she finds out the terrible reason for his absence a short time later, her world comes crashing down. But then the story takes an unexpected turn.

With The Secret of Naples, director Ferzan Ozpetek has created a real hit with audiences in Italy. At the beginning, the film knows very well how to build up a gripping, electrifying atmosphere - first through a slightly disturbing opening sequence and then through a rather explicit, but definitely erotically tingling sex scene. As a viewer, you want to know what the prologue has to do with the story of Adriana and Andrea and where their journey is headed. The scene where Adriana learns what happened to Andrea is extremely powerful - although as a viewer you can see it coming from far away.

All these are set pieces for a successful mix of eroticism, thriller and mystery, immersed in mesmerizingly beautiful images of Naples. But then the story takes a turn - and with it comes more and more confusion. Although this also has its charm, it gets a bit out of hand towards the end. The ending leaves the audience completely perplexed. On the one hand it's exciting to speculate about what really happened and how much the borders between delusion and reality are blurred. But a little more clarity would have been good, so that the end doesn't leave such an unsatisfying impression.

The Secret of Naples is an interesting film, which already exudes a certain charm. But apart from the fact that some scenes are way too long, the production gets increasingly lost in a muddle in the last third, from which there is no escape. After the successful build-up of tension at the beginning of the story, this feels more disappointing than challenging. And that's why in the end it's only worth seeing with some restrictions!

Cinema trailer for the movie "The Secret of Naples (Italien 2017)"
Loading the player ...