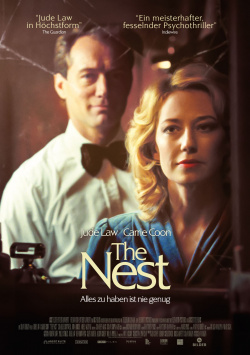 The Nest - Having Everything Is Never Enough

1986: Rory (Jude Law), a successful broker and ambitious entrepreneur, lives with his wife Allison (Carrie Coon) and their children in a true suburban idyll in the USA. Here they actually have everything and are extremely happy. Nevertheless, Rory is convinced that he can be much more successful in his old home country England. He persuades Allison to leave the States and move to a remote English country estate. At first glance, this also seems like paradise, especially since Allison also has enough room for her beloved horse. But professionally, things don't go quite as planned for Rory. Driven by the will to have more and more, he gets increasingly lost, which becomes an ever greater test of endurance for his family...

With "The Nest" director Sean Durkin has staged a bitterly wicked social drama using the example of a family, which deconstructs the greed for money and success with relish. The film shows, particularly impressively, how the outwardly happy couple grow increasingly distant from each other in passive-aggressive behavior before the slowly boiling conflict finally erupts. Not only is this superbly acted by Jude Law and Carrie Coon, but it's also extremely well written and elegantly directed. Iconic imagery that is both beautiful and ominous gives the film a very special atmosphere that quickly captures the audience despite a rather leisurely narrative pace.

What is really interesting is the contrasting development of the characters. While Rory threatens to break down from his destructive ego, Allison gradually finds the strength to stop running along with her hubby and start opposing him. It's fascinating in an almost disturbing way to watch Rory desperately try to keep up appearances, and in doing so, push himself further and further into the moral, financial, and interpersonal abyss. He is so driven by greed that he can't (and won't) see possible ways out of his situation. What consequences this can have for his family, he seems to completely ignore.

The whole thing culminates in a great final sequence, which works so well precisely because it does not meet the expectations of the audience. Nothing more should be said about it. Before the final conclusion, it is only necessary to highlight the extremely good acting of Carrie Coon and Jude Law, without which this film would have worked half as well. If you like intense dramas about morality, trust and family, you should not miss "The Nest". Absolutely worth seeing!

Cinema trailer for the movie "The Nest - Having Everything Is Never Enough (Großbritannien / Kanada 2020)"
Loading the player ...