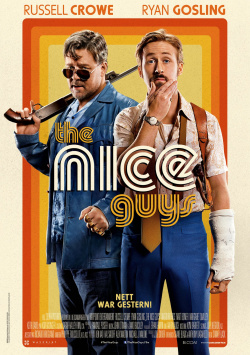 Los Angeles in the 1970s: Jackson Healey (Russell Crowe) is a man for the rough. If you want to send someone an unmistakable message, you hire Healy. Young Amelia (Margaret Qualley) hires him to get an alleged pursuer to leave her alone. That pursuer turns out to be private detective Holland March (Ryan Gosling), who got on Amelia's trail by investigating the case of porn queen Misty Mountain, who died in an accident. Suddenly, the two disparate men are entangled in the case and are forced to work together. The fact that March's pubescent daughter Holly (Angourie Rice) also gets involved in the investigation doesn't make things any easier, especially as the two get on the trail of a large-scale conspiracy that catapults them directly into the sights of a merciless professional killer.

After the huge success of Iron Man 3, director Shane Black is back to baking smaller rolls with The Nice Guys. With the comedy he follows up thematically on his directorial debut Kiss Kiss Bang Bang. The auteur of buddy cop classics like Lethal Weapon once again proves his flair for perfect screen duos and a coherent mix of comedy and action. When Russel Crowe and Ryan Gosling offer each other here a great verbal exchange after the next, when they are incidentally wild chases through Los Angeles or beat up bad guys, and when all this is then enriched with a completely bizarre dream sequence and a lot of black humor, then in the end a very big fun comes out of it.

It's nice that after the commercial success of Iron Man 3, Black has resumed the tongue-in-cheek ironic and not-always-quite-politically-correct tone that made Kiss Kiss Bang Bang so amusing, even if a more family-friendly production might have brought him a few more viewers. But by targeting a more adult audience, Black is also able to throw in some genuine moments of surprise in a very light-hearted way. This adds to the already high entertainment factor of the film. In the end, the whole thing doesn't quite reach the class of Kiss Kiss Bang Bang. But a wonderfully quirky crime comedy and an amusing homage to the cinema of the 70s, the film has become all the time.

Derein lives The Nice Guys over long stretches of great interaction of the two main actors, who take themselves here not too seriously and quite obviously had a lot of fun while shooting. This is also transferred to the audience, which is animated again and again to hearty laughter. A cool soundtrack, a successful mix of action, wordplay and delightfully silly slapstick, as well as a 70s look interspersed with ironic winks help the film get over some small hangs. From time to time you get the feeling that not the whole potential of the story and the good actors was used. But even if there are some weaknesses and justified criticisms, the film is so much fun over long stretches that in the end a very positive overall picture remains.

Who has a soft spot for biting crime comedies, who wants to see Ryan Gosling make such a nice monkey out of himself and who liked Kiss Kiss Bang Bang, should not miss this delightful retro fun. Absolutely worth seeing!