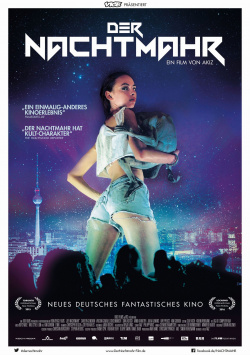 Actually, Tina (Carolyn Genzkow) is a normal 17-year-old girl: she is part of a cool clique, she goes to wild parties and fights her way through the boring school day. But all that changes abruptly when she collapses for no reason one night at a secret pool party. From then on, she is visited night after night by an incredibly ugly creature that only she can see. Her parents suspect drugs or a nervous breakdown, and Tina also doubts her sanity at first. But then she accepts that this creature is real and an unusual, almost tender bond develops between the girl and the creature. But can she also convince her parents and friends that she has not gone mad?

I am admittedly not one of the very great friends of German cinema. While there are always some very positive surprises, most of the time I feel confirmed in all my prejudices about German films and their lack of courage to break out of common patterns. That's why I'm always especially happy when I see a film like Der Nachtmahr that tries to go different ways. Whether or not it succeeds is another story. But first of all, the courage to break out of the usual conventions, visually as well as dramaturgically, has to be praised. Filmmaker and artist Akiz presents a wild mixture of creature horror, coming-of-age story and psychological thriller, rooted in the expressionist cinema of the 1920s. This truly weird mix of styles alone is a testament to the courage to be different, and therefore deserves all kinds of praise.

That such a film is not necessarily aimed at a mass audience should quickly become clear. But even among open-minded cineastes who enjoy a German genre film beyond the mainstream, Der Nachtmahr might not only evoke enthusiasm. There is no question that the atmosphere alone, which is created by the very special visual aesthetics of the production, makes the film a very special viewing experience. The mixture of supposed reality, dreams and delusions also provides moments in which the work definitely has cult potential. However, this is also contrasted by some very unwieldy moments and noticeable lengths. In places, you get the feeling that the story would have worked much better as a short film and has been somewhat laboriously inflated to feature film format here.

Despite this, the film, which was just made for less than 100,000 Euros, has enough charming moments and the production has plenty of innovative ideas to console over some of the weaknesses. Even if it's not the big hit, Der Nachtmahr definitely shows the talent of a filmmaker who obviously doesn't want to be pigeonholed. It will be interesting to see how Akiz will continue his planned demonic trilogy about birth, love and death. So if you want to see a different side of young German cinema and are generally open to cinematic experiments, you should support this work with a visit to the cinema. Worth seeing

Cinema trailer for the movie "The Nightmare (Deutschland 2015)"
Loading the player ...