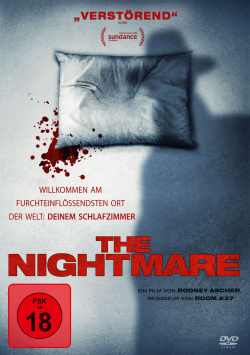 Movie: What a horror idea: You lie relaxed in bed at night and suddenly realize that you can no longer move. In the state of this so-called sleep paralysis, you are then also confronted with terrifying nightmares. No matter if you believe to be abducted by aliens or that the shadow man is suddenly standing in front of your bed, you can't escape this horror scenario. Rodney Ascher, who approached Stanley Kubrick's classic The Shining in a very unusual way in Room 237, stays true to his non-conformist style to deal with the phenomenon of sleep paralysis in The Nightmare. To do so, he interviewed eight sufferers from different parts of the world and attempted to visually translate their fears and nightmares.

The result is a strange hybrid of documentary, experimental and feature film. What the victims tell here is not simply acted out. Ascher tries to adequately visualize the fears of the protagonists. This is disturbing, somewhat unwieldy, but in a certain way also fascinating. However, this also ensures that the film is not only thematically extremely difficult fare. There's no classic horror here created by dark figures or nightmarish scenarios. What makes this film so effective is the attempt to use lighting effects, editing techniques, and other means to make the nightmares tangible, thus allowing the viewer to experience them for themselves.

This only succeeds, however, if you can engage with the very unusual narrative style. This starts with the events narrated by the film's eight protagonists. You have to be open-minded about the phenomenon and believe what is told here. Only then, aided by the visuals of the film, can you begin to understand the horror that is sleep paralysis and what the people who suffer from it have to go through.

Then it is also extremely interesting to hear how each of the interviewees sought help, what they use as a defense mechanism, and whether there has been any such thing as improvement for them at all over time. The most fascinating aspect of the film, however, sets in after it ends. Because even if you think that what you saw wasn't really scary now, the idea of being affected yourself once doesn't let you go so quickly. And when you lay down to go to sleep, you're guaranteed to feel a little queasy - whether you want to or not. And for that, this docu-horror has earned a very clear Worth Watching.

Picture + Sound: The DVD's picture does a good job of bringing out the gritty, chilly atmosphere that prevails in the protagonists' bedrooms. The overall sharpness is at a good level and only shows some minor weaknesses in the very dark scenes. The colouring is very atmospheric and the contrast is also convincing in many scenes. The sound is ostensibly determined by the dialogues, but also has many small and larger sound effects to offer, which always provide a pleasant goosebump feeling and bring a little movement in the surround area. Good!

Extras: Apart from a trailer show from the provider, there is no bonus material on the DVD.

Conclusion: The Nightmare is a strange mix, in the best sense of the word, of documentary, experimental, and feature film, shedding terrifying light on the frightening phenomenon of sleep paralysis and attempting to make the protagonists' nightmares visually tangible. The DVD is technically well made, but unfortunately the bonus material of the US DVD didn't make it to Germany. Not a film for a mass audience, but if you like unusual scary fare and experimental documentaries, you should take a look here. Recommended