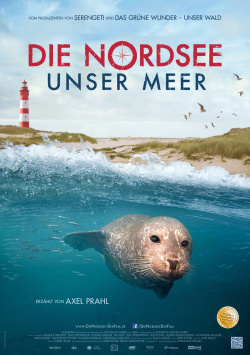 The flood of documentaries that want to bring the viewer closer to nature, land and animals, just does not stop. Most recently, they have shown us Germany from above, taken the viewer on a dream journey through Bavaria or introduced nature lovers to Our Forest. The latest trip takes those interested to the North Sea. With tour guide Axel Prahl commenting on the fascinating images with Nordic composure, Jörn Röver and his team impressively show how diverse the North Sea habitat is in Germany, Denmark, Norway, Scotland, England and the Netherlands.

On more than 2,000 shooting days, great footage was captured with state-of-the-art HD cameras at over 60 locations above and below the water. Whales, fighting seals, gannets breeding on the red rocks of Helgoland, the species-rich habitat of the Wadden Sea, ice sharks, sea cats or even the incredible power of the waves are thus revealed to the viewer in truly fascinating images. This is sometimes surprising or amusing, astonishing or inviting to dream. The commentary by Axel Prahl is not only informative, but also provides in some moments with wonderfully dry humor for a really good mood.

It is highly creditable to the makers that they have tried to offer their viewers something new, to introduce them to rather unknown sea creatures and to present them with amazing facts that may not have been familiar to most people in this way. Nevertheless, the film ultimately suffers from the fact that there have simply been too many similar works in the recent past. Many things are already familiar from documentaries like The North Sea from Above, The Coasts of the North or Germany's Coasts - The North Sea. Surely a film about the North Sea can not do without the cliffs of Helgoland, but such motifs are already quite overused in the documentary field to be able to really inspire.

Nevertheless: even if numerous scenes leave the impression that you have seen them before, outweigh in the end but the positive moments, the breathtaking shots and the simply beautiful images with which The North Sea can come up virtually every second. The film is a 90-minute short holiday to the sea, an entertaining lesson about the very vulnerable, fascinating ecosystem and an excellent example of the talent and dedication of the documentary filmmakers involved. All good reasons that make the film absolutely worth seeing, not only for interested viewers in the far north!

Cinema trailer for the movie "The North Sea (Deutschland 2013)"
Loading the player ...