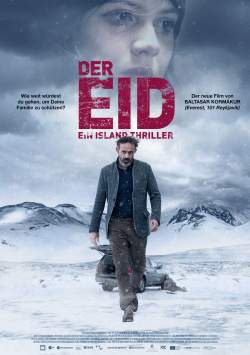 The life of successful heart surgeon Finnur (Baltasar Korm&aacute;kur) could be perfect, were it not for his eldest daughter Anna (Hera Hilmar), who is causing him increasing worry. The reason is Anna's boyfriend &Oacute;ttar (G&iacute;sli Örn Gardarsson), through whom the girl seems to live in a constant frenzy of drugs and parties. All Finnur's attempts to talk sense into his daughter fail. When he also fails with &Oacute;ttar, he resorts to more drastic means: after witnessing a drug handover, Finnur turns Anna's boyfriend in to the police - but not with the desired result. The dealer remains free, but the drugs are confiscated. And the money he loses as a result, &Oacute;ttar now claims from Finnur. The latter now makes a decision that threatens to escalate the situation once and for all.

With The Oath Balzasar Korm&aacute;kur returns to his Icelandic homeland after several successful Hollywood productions (2 Guns, Everest). Here he has directed an atmospherically dense thriller, which despite a very quiet staging can captivate until the end. Korm&aacute;kur, who didn't miss the chance to play the lead role as well, makes Finnur's desperation and helplessness very comprehensible. He portrays a man in whose life everything has always gone according to plan. Now he loses control - especially over his beloved daughter. In his attempts to save her, he actually makes things worse.

In an effort to restore the beautiful appearance of his former model family, the heart surgeon ruins (maybe?) his own life - and that of his wife and children. The film derives its tension from the fact that Finnur, having come to this realization, tries to prevent it - and to do so he has to question his personal, as well as his professional ethics. The good acting of the actors and the atmospheric images of the Icelandic landscape create an oppressive mood, which is difficult to escape as a viewer.

The Oath forces its viewers to make up their own minds about whether Finnur's actions are right or wrong - and to interpret the ending itself to that effect. This, too, adds to the thriller's distinctive feel. Korm&aacute;kur, who has often proven that he can direct good action, proves here that it just does not always need great speed, shootouts and explosions to be able to create real suspense. If you are looking for psychodramas with nordic tristesse and a good story, you shouldn't miss this movie. Absolutely worth seeing