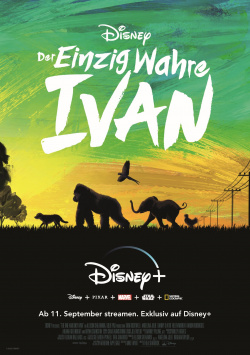 The One and Only Ivan

Ivan, a 180-kilogram silverback gorilla, is the star of Mack's (Bryan Cranston) circus show. Along with Stella, a lady elephant, and other animals, Ivan entertains visitors to the shopping mall of an American suburb day after day. But little is left of the glory of the old days. Fewer and fewer people want to see Ivan and his animal friends. Helping to save them is a new baby elephant named Ruby, who has just been separated from her parents in the wild. Ivan has to promise the seriously ill Stella that he will take care of Ruby and bring her back to the wild. Together with Bob the dog and the other animals of the circus, Ivan aims to make the promise a reality.

"The One and Only Ivan" is based on the popular children's book by Katherine Applegate, which in turn was inspired by the true story of Ivan the gorilla. The family film was staged as a mixture of live action and CGI, whereby the computer-generated animals were also given very prominent voices in the USA. For example, Sam Rockwell as the gorilla Ivan, Angelia Jolie as the elephant Stella, Danny DeVito as the dog Bob or Helen Mirren as the poodle lady Snickers stood behind the microphone. The result has become a typical Disney film, which could be accused of such fondly used stylistic devices as humanizing animals by letting them speak. Also a certain romanticization of animals living in captivity for the amusement of humans could be criticized especially at the beginning of the film.

But this would not do justice to the film. Because even if there are legitimate points of criticism and the film truly does not break new ground, Thea Sharrock manages very well to hit the intended target audience right in the heart with charmingly drawn characters as well as a mixture of child-friendly humor and drama. You can laugh here - even if some of the jokes turn out to be too childish - and at the same time cry a little bit, in other moments you can be excited without it ever getting too exciting for children. This actually fulfills all the criteria for a nice family film - including the positive message, of course.

Despite some beautiful images and the great animated animals, it is not bad that "The One and Only Ivan" did not make it to the big screen as originally planned. Somehow, the film doesn't seem "big"enough for that. Instead, it offers exactly the kind of film that you might want from a streaming service as a tempting original: a film for which you might not necessarily have spent 15 euros in the cinema, but which is entertaining and charming enough to offer a few nice moments in the home cinema. And for that there is then quite clearly a: Absolutely worth seeing - also for the successful dubbing!