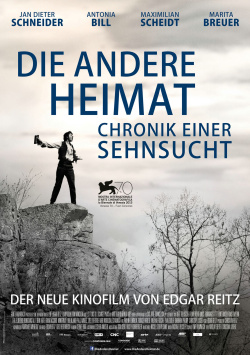 The Other Homeland - Chronicle of a Longing

In the mid-19th century, poverty, famine and oppression reign throughout Germany. For hundreds of thousands, emigration is the only way to escape this misery. In Hunsrück, too, many people dream of a better life in a new homeland. Among them is young Jakob (Jan Dieter Schneider), who uses every free minute to read and learn the language of the jungle Indians. He is firmly convinced that he will be able to use it one day when he has found his own paradise in the forests of Brazil. But the road there is long and dreams alone are not enough to get him there. Especially Jakob's father, who puts all his strength into the preservation of the family, has no sympathy for his useless son's daydreams. Only in Jettchen (Antonia Bill), the daughter of an impoverished gem cutter, does Jakob seem to have found a kindred spirit. But whenever a small glimmer of hope warms the lives of the two young people, fate unceremoniously strikes with bitter harshness, threatening to destroy every spark of their hope and longing.

With The Other Homeland, filmmaker Edgar Reitz continues the spirit of his legendary Heimat trilogy. Once again, the Simon family from the fictional village of Schabbach takes center stage, but this time in the year 1840. The village was painstakingly constructed in detail for the shoot, with Reitz placing great emphasis on using only materials that would have been available to people in the 19th century. The same was to be implemented in the tailoring of the costumes. In this way, the actors were offered the greatest possible authenticity in which they could embed their realistically designed play. The film was shot in black and white with mostly natural lighting, with small elements such as flames or flowers being coloured now and then. In this way, the small glimmers of hope that repeatedly shine in the dreary everyday life of the people here are symbolized.

The Other Homeland is a truly ambitious project that can be called absolutely successful in terms of its intentions. But it is also a rather difficult and unwieldy film that demands a lot from its viewers. For example, the very sustained narration over the course of almost four hours is just as exhausting as the authentic dialect, which is at times somewhat difficult to understand. In addition, the dreariness of the content, which is maintained by constant blows of fate almost throughout the entire running time, ensures that the film cannot necessarily be described as what is commonly considered entertaining.

The mammoth work is therefore a very special challenge, which should only be faced by those viewers who are familiar with the narrative style of Edgar Reitz and highly appreciate his previous home movies. For those who know what they are getting into will be offered a truly special work that transports the viewer for four hours back to the year 1840, which makes hunger, suffering and coldness downright palpable and which, with its sustained pace, sets an intense contrast to the fast-paced everyday life. Not easy cinema fare and for those viewers who can't get used to the somewhat unwieldy style, certainly a real test of patience. But if you love challenging program cinema and historical material of a very special kind, you should definitely visit The Other Homeland

Cinema trailer for the movie "The Other Homeland - Chronicle of a Longing (Deutschland/Frankreich 2013)"
Loading the player ...