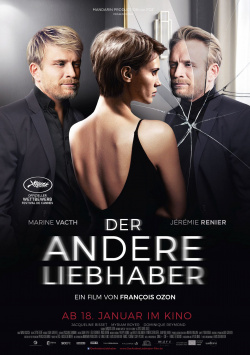 When young Chlo&eacute; (Marine Vacth) visits psychologist Paul (J&eacute;r&eacute;mie Renier), she finds in him not only the longed-for help against her pain, but also a man with whom she wants to share her life. A passionate relationship develops between the two. But soon Chlo&eacute; discovers that Paul is hiding something from her: he has a twin brother who also works as a psychotherapist. Since Paul won't talk about Louis, Chlo&eacute; secretly begins therapy with him. She quickly realizes that the brothers have nothing in common except their looks. Louis is arrogant, domineering - and extremely intriguing precisely because of it. Chlo&eacute; gets involved in an affair with him and thereby falls into a whirlpool of ecstasy and delusion - and at some point seems unable to distinguish reality from her fantasies.

Fran&ccedil;ois Ozon always manages to surprise his audience. Even though certain themes are repeated in his works, no two of his films are the same. Ozon not only dabbles in different genres, but also keeps varying his style within one. He is a filmmaker who doesn't seem to know creative stasis, but regularly challenges himself. The result is not always, but often of outstanding quality, as his recent award-winning black-and-white drama Frantz proved. The Other Lover can't match its emotional class, but this erotic psycho-drama is also a perfect example of Ozon's craftsmanship - if only because the film is so completely different from Frantz.

The filmmaker succeeds very well here in creating a particularly electrifying atmosphere that gives the somewhat abstruse story a gripping appeal. He lets the audience dive into a disturbingly fascinating world of sex, secrets and delusions. Spiced with a dash of bitterly cynical humor and some well-placed plot twists, there's a decent amount of tension built up despite the rather leisurely pace that's hard to resist.

Cinema trailer for the movie "The Other Lover (Frankreich/Belgien 2017)"
Loading the player ...