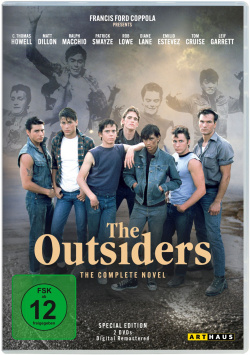 The Outsiders - The Complete Novel - DVD

Movie: Tulsa in the 1960s: In small-town Oklahoma, members of the "Greasers" gang keep clashing with the "Socs". The rivalry escalates when "Greasers" Ponyboy (C. Thomas Howell) and Johnny (Ralph Macchio) make eyes at pretty Cherry (Diane Lane), girlfriend of "Socs" Bob (Leif Garrett). A violent altercation ensues, during which Johnny accidentally stabs Bob. He and Ponyboy then decide to go into hiding for the time being - but there's no escaping one's responsibilities....

"The Outsiders" ranks as both a book and a film among the great classics of young adult literature. Published in 1967 by S. E. Hinton, who was only 19 at the time, the novel is still required reading in many US schools. In 1983 Francis Ford Coppola adapted the novel for the cinema. In front of the camera, he assembled a then largely unknown ensemble from which some world stars later emerged. For Patrick Swayze, Tom Cruise, Ralph Macchio or Diane Lane, the film was the springboard for long careers, some of which continue to this day.

After having to severely cut the theatrical version at the insistence of the distributor at the time, Coppola released a newly edited, 22-minute longer "Complete Novel" version in 2005. This new version, which has also been available in a complete German re-synchronization since 2012, was intended to be even more faithful to the novel. Even if the theatrical version was already very strong, it is then also this long version, which is just by additional character moments and a completely different beginning the clearly better version. The story is still stirring and moving even after almost 40 years. And even if some elements no longer seem quite contemporary, it is simply timelessly good and forms especially for young people even today a wide identification surface.

"The Outsiders" is a gripping drama that still thrills today with great acting, a great soundtrack (Stevie Wonder's theme song "Stay Gold" is just beautiful) and some very emotional moments. In this restored reissue, the film is available in both the original theatrical version and as a "Complete Novel". Whether as a DVD, Blu-ray or UHD - this classic should simply not be missing in any collection!

Picture + Sound: On the DVD you notice that the film has been restored. Of course, the age of the film can still be seen in the picture. But in terms of coloration and image sharpness here compared to the older release was qualitatively put on a notch. The Dolby Digital 5.1 mix seems a bit more powerful on the re-sync of the "Complete Novel" than it did on the theatrical version. In both cases, the soundtrack and dialogue are well matched. Then, in some scenes, the surround channels come into their own quite well. For a film that's almost 40 years old, this is really good!

Extras: The first DVD with the theatrical version offers a bonus interview with cinematographer Stephen Burum (12:01 min.) and a new interview with Francis Ford Coppola about key scenes from the film (7:30 min.). This is followed by edited scenes (2:20 min.) and a documentary about the house where parts of the film were shot, which has been transformed into a museum for the "Outsiders" over the past few years by Danny Boy O`Connor with the help of other fans as well as the author of the book (10:35 min.).

The DVD with the Complete Novel version has an interesting short documentary about the restoration of the film (18:10 min.) on offer. There are also two audio commentaries, one by Francis Ford Coppola and one by the cast, consisting of Matt Dillon, C. Thomas Howell, Diane Lane, Rob Lowe, Ralph Macchio and Patrick Swayze. Lowe, Lane, Macchio and Swayze recorded the latter together, while Matt Dillon and C. Thomas Howell recorded their commentaries individually.

The Blu-ray also has other extras to offer that were created for the initial release of the Complete Novel version. In addition to a retrospective making of featurette, there is a visit with author S. E. Hinton to the filming location in Tulsa, the casting is examined in more detail, team members read excerpts from the novel, there is a news report from 1983 and also more cut and extended scenes are on the program. If you want the full bonus offerings on the cult film, be sure to grab the Blu-ray.

Conclusion: "The Outsiders" proves after almost 40 years that Francis Ford Coppola has succeeded with the film adaptation of the cult novel a timelessly good youth drama. The new release offers, in addition to the film in two versions, some new extras. For the complete bonus material, however, you have to go for the Blu-ray. No matter in which format: the re-release of "The Outsiders" is absolutely recommendable in any case!