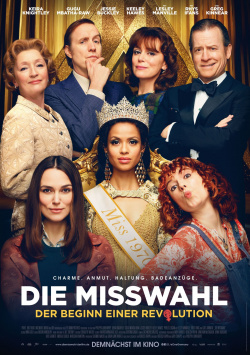 London in 1970: It's not just in her studies that Sally Alexander (Keira Knightley) realizes day by day that she is constantly disadvantaged as a woman. Even though the methods of the emerging women's movement seem a bit radical to her, she comes to the conclusion that perhaps radical methods are needed to really make a difference. So she joins a group led by the rebellious Jo Robinson (Jessie Buckley), who has already picked a target for their protest: The annual "Miss World" pageant, which this year will be held in London. As contestants prepare to appear on the TV event of the year in front of 100 million viewers, the women of the "Women's Liberation Movement" plan a special action during the show hosted by comedian Bop Hope (Greg Kinnear) to finally wake up the world. But they overlook the fact that for some contestants, like underdog Miss Grenada (Gugu Mbatha-Raw), the competition means the opportunity to make a real difference in their country as women - even if they have to pose in swimsuits to do it.

"The Pageant"is based on true events during the TV broadcast of the 1970 "Miss World" pageant. Director Philippa Lowthorpe, who became the first woman to win a BAFTA in the television category for her work on the acclaimed series "Call the Midwife - Call of Life, manages very well not to present the events in too one-sided a way. It would have been easy to focus only on the struggle of the women's movement. But since the other side is also illuminated from the point of view of some of the participants, it can also become clear that this competition, with all the justified criticism, can also be an important tool for the difficult path to equality.

It is also pleasant that the film does not work too intensively with the raised forefinger, but lets light, comedic aspects come into play again and again. From time to time this seems a little bit striking - for example when Greg Kinnear as Bob Hope degenerates to a sexist joke figure. Overall, however, the mixture of humorous lightness and serious message is really well done. Especially a conversation between Sally and Jennifer aka Miss Grenada transports this very well to the audience and makes not only Sally but also the audience think.

"The Pageant" is a charming, yet also quite conventional film. It is light on its feet, yet never flatly staged and superbly acted. Nevertheless, in the end the feeling remains that something more could have been taken out of the material. Really worth watching here, however, is the end credits, which juxtapose the actresses with their real-life role models and reveal what became of the women after the events of 1970 - which brings with it some really exciting information. If you like entertaining films about strong women, you can safely partake in this "miscellany". Worth seeing!

Cinema trailer for the movie "The Pageant (Großbritannien 2020)"
Loading the player ...