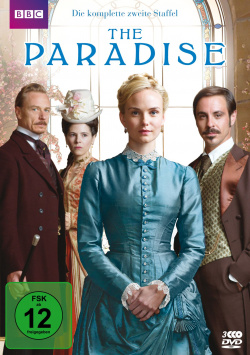 Film: One year has passed since John Moray (Emun Elliott) left his fiancée Katherine Glendenning (Elaine Cassidy) at the altar to confess his love to Denise Lovett (Jonna Vanderham). But the couple can't live out their young happiness as John has to go into exile to Paris because of the shame he has exposed Katherine to. The department store "The Paradise" seems to have been lost to him for good. Katherine, who is now married to Tom Weston (Ben Daniels), is the new owner of the department store after the death of her father. Katherine can't prevent the woman, who lost her great love for her, from making an ever-greater career there and even being promoted by Weston. But that Denise and John will be happy together after his return, Katherine doesn't want to let that happen. And while John Moray struggles by all means to get the "Paradise" back, Katherine uses all her skill to drive a wedge between Denise and her former fiancé...

The second season of "The Paradise", a loose adaptation of the novel "The Paradise of the Ladies" by the Frenchman Émile Zola, unfortunately also features the last episodes of the series. Series creator Bill Gallagher ("From Lark Rise to Candleford") has once again created a thrilling drama fare in these new episodes, which offers very good entertainment with a great set, beautiful costumes as well as lots of thrilling intrigues and dramatic entanglements. After the (supposed) happy end of the first season the band tried to give the story a little fresh wind with new twists and turns and to put new obstacles in the way of the romance between Denise and John.

The whole thing also works very well over long distances. Especially Tom Weston, who guards a dark secret, is a very exciting character, who always reveals new facets of his personality and thus provides some unexpected twists. Denise is also going through an interesting development, which John doesn't seem to be coping with very well. This makes the relationship between the two lovers very stirring even in the second season, even though John can't exactly collect many sympathy points from the audience because of his behaviour.

However, the new episodes don't quite reach the good level of the first season. Although the story seemed like a rather constructed costume soap from the very beginning, it doesn't stand out until the last half of the second season, as the makers seemingly tried too hard to spice the whole thing up with exciting twists and still bring it to a round ending. Although it wasn't clear whether the series would be continued when the last episodes were shot, they decided on a finale that would also work as a definite ending. And although not all storylines are resolved satisfactorily, the last episode as the end of the series is quite successful. Only the way there seems a bit bumpy and too constructed to leave the same positive overall impression as the first season.

No question, "The Paradise" is not a second "Downton Abbey". However, even though the dialogues lack a little bit of cleverness and some episodes show clear weaknesses, the second season again has an enormous addiction potential and a consistently high entertainment value. If you love opulent costume soaps and heart-warming romances and if you couldn't get enough of the hustle and bustle of the luxury department store in the first season, you shouldn't miss this box. Despite smaller weaknesses still absolutely worth seeing!

Picture + sound: The picture and sound quality of the DVD also make a good impression during the second season. The visual realization pleases in particular by a very warm, atmospheric coloring and a good overall sharpness, which only reveals slight weaknesses in a few small moments. The sound remains rather reserved for a production of this genre, but presents a convincing mixture of dialogues, music and ambient noises, which together form a harmonious sound backdrop. Good!

Extras: Unfortunately the 3-Disc Set does not offer bonus material.

Fazit: Also the second - and unfortunately last - season of "The Paradise" is again a very nice series for all lovers of high-quality romantic costume soaps. Even though the series can't quite keep up with the level of the first season and disappoint some plot strands, the entertainment value still remains at a high level. The DVD box of the second season presents the episodes in good picture and sound quality, only bonus material fans have to do without this time. Nevertheless, for all those who already liked the first season: absolutely recommendable!