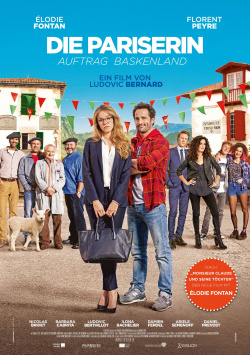 Young Parisian businesswoman Sibylle (&Eacute;lodie Fontan) has a job that may not be particularly moral, but it allows her to live luxuriously in the big city. She buys up small businesses for her company to make way for big, well-paying chains. Her latest assignment takes her to the Basque country, where a long-established family business is to be transformed into a modern supermarket. At first, everything goes according to plan until it turns out that the old shop owner who sold his store to Sibylle is no longer fit to do business and that she has to complete the sale with his nephew Ramuntxo (Florent Peyre). But he doesn't even think of giving up the shop. And so Sibylle has to go back to the small Basque village to bring in some heavier guns. But she quickly realizes that Ramuntxo and the other villagers are up to all sorts of tricks, and that this mission will be far more difficult to accomplish than previously thought.

The Parisian: Mission Basque is a light comedy from France that works really well in some moments, while other scenes just seem too over-the-top and hysterical. The successful moments arise - similar to his time with Welcome to the Sch`tis - by playing with the clichés about the inhabitants of the Basque Country. For the Parisian businesswoman, this place is a veritable parallel universe, which director Ludovic Bernard draws with a lot of tongue-in-cheek charm. Also, the good chemistry between &Eacute;lodie Fontan and Florent Peyre provides not only a few very good laughs, but overall an atmosphere in which the viewer can relax and feel at ease.

Unfortunately, however, it just doesn't succeed in maintaining this atmosphere permanently. There is a plot line in which Ramuntxo is haunted by his past, which just doesn't want to fit in with the rest of the movie. The whole thing culminates in a completely over-the-top action sequence, which doesn't fit in at all with the charming humour, especially at the beginning. Sure, even here there are moments that make you smile a little bit. Still, this part of the story just seems out of place somehow and leaves a somewhat bland aftertaste.

However, let's be honest: even without this weak point, The Parisian: Mission Basque would not have won any major film awards. The film offers shallow amusement that entertains well for long stretches and makes its audience laugh. If you don't expect more, you will also be able to overlook the really not very successful moments in the last act. And that's why the bottom line is still a solid: Worth seeing!