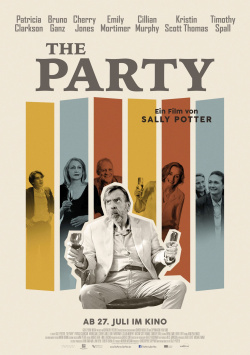 It's supposed to be a relaxed dinner hosted by ambitious politician Janet (Kristin Scott Thomas). It's supposed to be her night, after all, she's been appointed Shadow Cabinet Secretary for Health. But then her husband Bill (Timothy Spall) opens up in front of the guests with terrible news, followed by an unexpected confession. After the initial shock, the little party takes a very different course than Janet had planned. For now the other guests also reveal dark secrets and long pent-up tensions are discharged. The cultivated atmosphere gives way to an emotional chaos that heads inexorably towards disaster.

You know those parties where you feel a sense of unease from the first moment and want to go home as soon as possible? The Party chronicles just such an evening. And director Sally Potter also has some sympathy for her audience and ends her horror dinner after barely 65 minutes, after which the credits already start rolling. And to be honest: it's absolutely understandable if there are viewers who say that even this short running time would be too long already. Because Potter makes it damn hard to get involved with the characters and their story. The characters are unlikable and mendacious across the board - which is, of course, intentional, at least at its core. But since the viewer lacks an identifying figure, there's just no real reason to care about these upper-class problems.

Potter reduces her staging to the bare minimum. The whole thing takes place only in an apartment and for that reason alone seems more like a play. She has also completely dispensed with colours and presents her tragicomic soul striptease in sober black and white. These are also further barriers that you as a viewer have to overcome in order to get involved with this film. If you manage to do that, at least you're treated to a really good ensemble cast, albeit one that tends to be a bit over-the-top hysterical.

The Party is not an easy film to watch and clearly one that will extremely divide minds. Either you see it as a gem of humorous arthouse cinema, or you find it to be a pretentious chamber play of the particularly annoying kind. There's probably nothing in between. So if you like small, primarily dialogue-dominated program cinema fare with a theatrical flair and a bit of wicked humor, you'll probably have a lot of fun here. All others are advised to stay away from this party in any case. Worth seeing with reservations

Cinema trailer for the movie "The Party (Großbritannien 2017)"
Loading the player ...