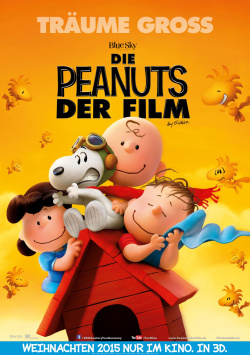 The Peanuts - The Movie

Charlie Brown and his friends are coming to the movies: More than 65 years after their comic book debut, the Peanuts have made it to the big screen. And everything has stayed the same here, too: Charlie Brown is still the klutz who puts his foot in his mouth. Even the attempt to fly a kite ends in chaos for him. For everyone Charlie Brown is just the loser, the big laughing stock. But then a new girl moves into the house across the street and joins his class. For Charlie Brown, this is the perfect chance to finally show someone a whole new, confident side of him. But no matter how hard he tries, he just can't muster up the courage to approach the girl. Even the support of his faithful dog Snoopy doesn't help. But then suddenly a misunderstanding turns Charlie Brown into the school's hero. Could this win him the heart of his new classmate?

The Peanuts - The Movie attempts something extremely risky. Director Steve Martino and his team set themselves the task of transferring the spirit of the old comic strips and TV cartoons to the big screen. At the same time, the original charm of the Peanuts was to be preserved despite state-of-the-art computer animation and 3D optics. This was no easy task, because after all, the zeitgeist and viewing habits have changed considerably in recent decades. The rather sedate pace of the animated specials, the very simplistic drawing style and the somewhat subversive humour of the comics, all these do not necessarily correspond to the ingredients from which today's family blockbusters are made. And so it was to be feared that Peanuts would also fall victim to excessive modernization and that it would be trimmed to be cool at all costs.

But that is fortunately not the case. Aside from the sadly unavoidable dance sequence at the end of the film, which you'll be treated to in just about every animated film, and some gladly used 3D rollercoaster effects, the 2015 Peanuts are exactly who you've come to know and love in the comics and previous animated episodes. Charlie Brown is still your typical underdog, who even now Lucy constantly pulls the ball away from when he wants to step up. Linus still has his cuddle blanket, Pig Pen is still surrounded by a cloud of dirt, Schroeder loves Beethoven as much as ever, and Marcie still calls Peppermint Patty sir. And then, of course, there's Snoopy, who likes to lie on top of his doghouse rather than in it, is friends with the little yellow bird Woodstock, and in his imagination is always fighting the Red Baron in World War I.

Adults don't appear in the 2015 version of Peanuts either. If they do, you only see their legs and hear the familiar wah-wah instead of their voices. It's pleasant that the creators have stuck to these familiar motifs in all consistency, even if it means they run the risk that younger children in particular won't understand all the gags and innuendos. It was apparently very important to them to honor the legacy of Charles M. Schulz in exactly the way that Snoopy and his friends deserve. At times, this can seem a bit tedious for very young moviegoers. But all in all, The Peanuts - The Movie is perfect family entertainment that kids and adults alike can enjoy. The 3D effects are very restrained for long stretches. Only when Snoopy devotes himself to his novel about the fight for the heart of a beautiful dog lady and against the Red Baron, there are a few more spectacular effects, but they do not really overwhelm even small 3D glasses wearers.

All in all, The Peanuts - The Movie is an entertaining animated pleasure with a lot of charm, wit and a very nice story, whose morals are fortunately not hit with a sledgehammer on the audience. An all-round successful cinema debut of the cult characters and therefore also: Absolutely worth seeing!