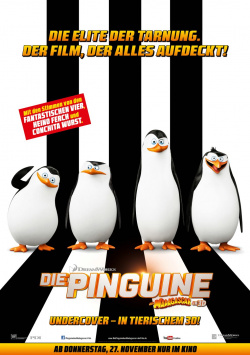 The Penguins from Madagascar

Skipper, Kowalski, Rico and Private (voiced by The Fantastic Four), the secret stars of the three Madagascar movies and heroes of a TV series, finally get to have their own big screen adventure. In The Penguins of Madagascar, the four penguins get to deal with the evil Dr. Octavius Brine, who is tired of always being in the shadow of the penguins so beloved by zoo visitors. Therefore, he has developed a weapon that could be dangerous not only to Skipper, Kowalski, Rico and Private, but to all penguins. To foil Octavius' diabolical plan, the four undercover birds must team up with the elite agents of Northwind. But this cooperation will not be easy, as Skipper clashes again and again with their leader, Geheimsache. Not exactly the best conditions for saving the world.

With The Penguins of Madagascar, Eric Darnell (Madagascar 1-3) and Simon J. Smith (Bee Movie) have directed a turbulent animated adventure that strays just far enough from the Madagascar films to have some recognition value without seeming like a tired rehash. After a brief introduction showing how the four penguins found each other, there's a delightfully self-deprecating trip to the end of Madagascar 3, from which the penguins' new adventure takes off. This ignites a veritable gag fireworks display, especially in the first twenty minutes, with some wonderful ideas that provide hearty laughs, and not just for children.

When the penguins fight the supervillain Octavius in the best James Bond manner and engage in a wild chase through Venice with his henchmen, the film's fun factor skyrockets to the top. And it stays there when Skipper and co. cause all kinds of chaos in the main headquarters of Nordwind. It's only in the final third that the hubbub takes over a bit, losing much of the film's original charm. Sure, younger viewers in particular will still have a lot of fun with the turbulent finale. But there's unfortunately not too much left of the inventiveness that made up the first act in particular.

The animations are clearly based on the style of the Madagascar films, with some really good 3D effects being used. And the dubbing can also be considered quite successful, with the Fantastic Four guys in particular doing their thing really well again. All in all, The Penguins of Madagascar may not be a real smash hit, but this somewhat different agent comedy is a lot of fun. And despite a few flaws, Skipper, Kowalski, Rico and Private have definitely shown that they're amusing (and cute, of course) enough to carry a movie on their own without their Madagascar counterparts. With enough good gags in the bag and some truly original action sequences, they make sure that all fans of the four penguins get their money's worth. And for all weaknesses there is still a clear: Absolutely worth seeing!

Cinema trailer for the movie "The Penguins from Madagascar (USA 2014)"
Loading the player ...