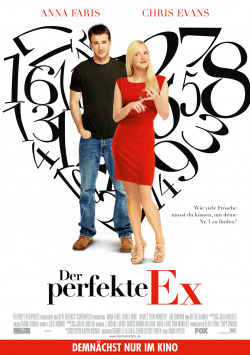 A small article in a women's magazine is enough to throw the life of Ally Darling (Anna Faris) completely off track. Because with horror the young single woman must read there that people, who had 20 partners or more in their lives, missed the chance for the one great love. So one of her exes must be the perfect man for her. With the help of her new neighbor Colin (Chris Evans), a womanizer of the worst kind, Ally sets out to track down her exes to find out which one of them is the one, perfect ex. But after the first reunions all turn out to be disasters, Ally has to ask herself if she really needs to look for the right one in the past, or if she shouldn't take a step into a whole new future...

The Perfect Ex is a perfect example of why American comedies don't necessarily have the best reputation. Because actually, the script has a nice idea or two to offer. And the opening scene, in which it is finally shown why women in movies always look perfect after getting up, actually promises an amusing cinema fun. But unfortunately, director Mark Mylod fails to deliver on that promise. Rather than clever wit, Mylod relies on crude gags, unsavoury and above all unfunny jokes, and the completely over-the-top grimaces of lead actress Anna Faris, who seems to have given up showing any more acting talent in films than fans have grown accustomed to from her since the Scary Movie films.

It's impossible to say exactly what went wrong here. Mark Mylod, who has built quite a reputation, especially on television, with his work for acclaimed comedy series like Entourage and Shameless, also sends any semblance of pretension packing here. Good supporting actors like Martin Freeman (The Hobbit) or Ari Graynor are burnt out without restraint and even Chris Evans, who in recent years has repeatedly shown something like a thoroughly present talent even in comedic roles, delivers only a rather average performance. But what is once again particularly disturbing is that behind all the crude, low-level humor hides an incredibly prudish, morally mendacious message, which of course must be very thickly applied in the end in a clichéd kitsch finale.

I'm really not someone who needs a very high level to have a good time. Sometimes simple comedies are a lot of fun and even raunchy humor can be really funny. But when the whole thing comes across so uninspired, loveless and above all stupid, then it's just no fun at all, despite the many actors that are actually worth watching, but it's just a very annoying kind of waste of time. At most, very diehard fans of Anna Faris might not regret buying a ticket for this one. All others be warned: the perfect ex is anything but a good movie. Too bad!